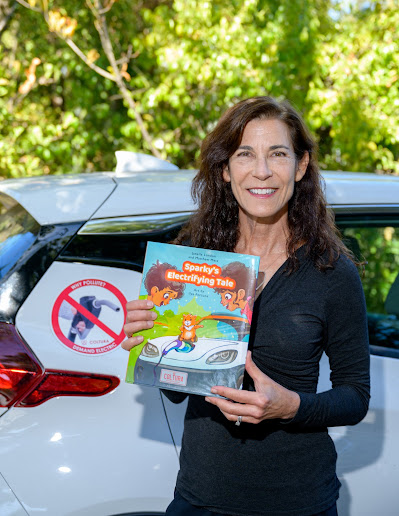 Sparky’s Electrifying Tale is the first-ever children’s book to explore the effects of gasoline and options for cleaner modes of transportation.

Written by Coltura founder Matthew Metze and co-exectutive director — and Menlo Park resident — Janelle London, the book approaches the topics of climate change and the harms of gasoline through the vivid imagination of a hamster named Sparky, who magically transforms a family’s gas car into an electric vehicle.

“As more state governments and countries look to end the sale of new gasoline-powered vehicles as early as 2030, now is a pivotal moment to reach the generation who will begin driving just as these new laws come into effect,” says Janelle.

“We need to do something on a big scale, to change both policy and culture. Children’s minds are more flexible — do we really need gasoline?  We’re hoping the book will spark conversations between children and their parents.”

In July, Coltura released new research that found converting the biggest users of gasoline to EVs in the next 10 years is critical to reaching President Biden’s climate goals and that present EV policies are poorly suited to shifting them. The report, “Gasoline Superusers,” provides an in-depth look at the data available on drivers in the top 10% of gasoline consumption, so-called “gasoline superusers.” It analyzes EV incentives and other policy options for transitioning superusers to EVs and presents a model for achieving significant cuts in gasoline consumption by 2030.

Note: Janelle is vice chair of the Environmental Quality Commission for the city of Menlo Park.