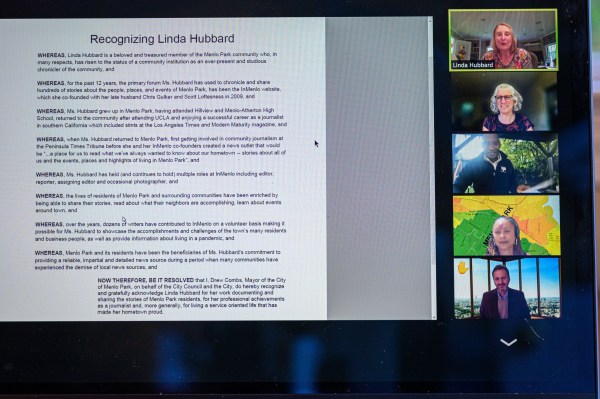 Longtime Menlo Park resident Linda Hubbard (upper right), editor and co-founder of InMenlo.com, was recognized last night by the Menlo City Council and the City with a proclamation recognizing her work “documenting and sharing the stories of Menlo Park residents”…and “for living a service oriented life that has made her hometown proud.”

I first met Linda when I did some reporting for InMenlo some years ago and we’ve continued to collaborate in her capacity as Contributing Editor of PUNCH Magazine. These local journalistic pursuits followed time spent in Southern California where she was an editor at the Los Angeles Time and Managing Editor of Modern Maturity (now AARP the Magazine).

She was introduced to journalism at Hillview School (when it was a K-8) and later at Menlo -Atherton High school before heading off to UCLA. She got her first taste of community journalism at the Peninsula Times Tribune when she moved back to Menlo Park in the ‘90s.

In remarks, Linda reiterated how much she’s valued getting to know local leaders. “We’ve never covered politics but we do cover people and it’s been a delight getting to know you all.”

She explained that InMenlo was born in 2009 over a cup of coffee after a walk her late husband Chris Gulker took with Scott Loftesness, but underscored that it never could have continued without the generous support of contributors, writers and photographers.

“It’s been a delight to do and I’m grateful I can do it,” she summed up.

Go online to listen to the proclamation being read and to hear Linda’s comments.

Screen grab and video recordings courtesy of Robb Most.

Linda aka Miss Prunella to her close copywriters has the pizzazz all word crafters need. She has the pinch and punch to make a seemingly trivial story have verve and nerve. Who wouldn’t love this Bronte sister!!
An observer of such excellent writing would say “Watch out for other towns” bidding on her services, but Atherton has her heart and soul!!
Congratulations Miss P!
Your Indiana fan club!