For Menlo Park teens, the San Francisco music scene was magical back in the day 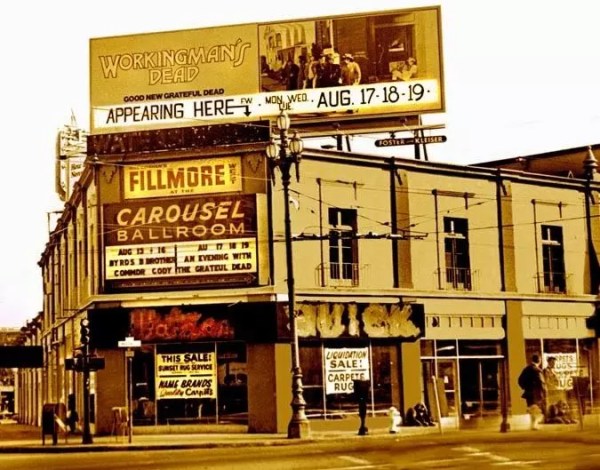 Author’s note: This is dedicated with gratitude to Steve Marcus, without whom none of these cherished memories would exist for me.

In 1969 our newly-issued driver’s licenses were like immeasurable prizes, coveted and closely guarded in our wallets. And with these fantastic visas to the world at large, me and my friends’ lives changed radically overnight. Suddenly the borders of our existence expanded like a teenage big bang, and the possibilities of space exploration now seemed limitless. However it wasn’t enough to just possess the miraculous driver’s license, because to really score you also had to have the benediction of permissive parents in order to reap the maximum benefit.

Few of us did. But I was lucky enough to be best friends with Beth Johnson, because Beth Johnson was best friends with Laurie Chaikin, and they in turn were best buddies with Steve Marcus, and Steve Marcus’ liberal parents, in an exceptional gesture of extravagant trust (or perhaps insanity), let him have the car to drive to concerts at Fillmore West and Winterland in San Francisco on weekend nights. A breathtaking, almost unheard of privilege for a kid our age. And so it was, by sacred membership in Beth’s entourage, and by sheer damn luck, I gained an entitlement to this phenomenal entrée into the world of live rock and roll at the legendary rock palaces of the era.

Steve Marcus and his older brother Greil lived on the wooded, one block long Peninsula Way across the street from the progressive Peninsula School in Menlo Park. Steve was in my class at M-A, and I’d sometimes hang out at his house after school and fool around on a drum set he had in their rec room.

His brother Greil had also gone to M-A, graduating in 1963. In 1969 when, like manna from heaven, all our driver’s licenses were bestowed on us, Greil Marcus started writing record reviews for the newly launched Rolling Stone magazine, the first ever album reviewer for that publication.

This was the other serendipitous convergence of events that paved our way to the hallowed storied doors of the Fillmore, because Greil got us all complimentary tickets, and with his journalist perks, ushered us in for free.

One weekend afternoon Steve and I were in Berkeley and stopped by Greil’s apartment. I was stupefied when I walked in. The entire place was filled with records, hundreds of them, no, thousands of them, from floor to ceiling, a fortress of records, a palisade of albums. I’d never seen anything like it and Greil let me snoop through his collection, which was fascinating in its wide-ranging eclectic scope. Far deeper a thinker than a mere music critic or rock historian, he has a sharp penetrating eye and a unique ability to read the culture, and with over 20 published books, Greil is one the eminent social and probing cultural critics writing in America today.

Bill Graham was a German-American impresario and rock concert promoter, who as a child had fled Nazi Germany at 10 years old by literally walking across Europe to escape the Holocaust, eventually making his way to New York City, and from there to California. In San Francisco he acquired a venue on the corner of Market St. and Van Ness Ave., on the upper floor of a carpet store (later a Buick dealership), called the Carousel Ballroom. He renamed it Fillmore West and started booking bands there in 1968.

My friends and I started showing up there a year later in 1969. There was always a line stretching along Market street to get in, and it was always chillier there than the Mediterranean climate of Menlo Park. My jean jacket, studded with anti-war buttons was no wind breaker for the icy city gales that rushed over us, but I didn’t care. Even the air itself smelled of foreign lands, of gasoline and cigarettes and Bar-B-Q, it felt charged with enchantment.

At the top of the stairs just past the ticket taker was a table with a silver plated 10 gallon tub filled with fresh apples, and a sign that read “Have one….or two.” Bill Graham, although a shrewd businessman, was also deeply humanistic and known for his kindness and compassionate nature. He was always looking for ways to help and nurture the young people who flocked to his shows at his hippie ballrooms, and for some of them this may have been a badly needed meal.

But there was a story to those apples. In Germany in 1938 when Bill was 8 years old and known as Wolfgang Grajonca, his mother saw the approaching dangers and sent him to an orphanage at a chateau in France where he lived for two years with 64 other children, until France fell to the Nazis and the group of children were led on foot across France to safety in Spain. His mother died on a train bound for Auschwitz, and his sister died in that camp. But while he was at that chateau there were many days the only food the children had to eat were apples little Wolfgang would pilfer from a nearby orchard and bring back for himself and the other kids. Roots run deep and memory persists, and Bill never forgot where he came from.

I think that I never felt more alive than when sitting with my friends on the dirty wooden floor of the Fillmore West listening to Cream, Santana, Credence Clearwater, Jethro Tull, or Procol Harum. These were not even the bands I privately listened to at home, as I was not so much a rock and roller as I was a hardcore folkie. I was madly in love with and had pledged allegiance to my boyhood hero, Phil Ochs. It was Dylan and Baez, Buffy Sainte Marie and Odetta, Tim Hardin and Leonard Cohen that filled my record player. And of course, Laura Nyro, the supreme Goddess of my adolescence. But no one I knew listened to those artists, and I never had anyone to share my godly adoration of them with. I lived alone in my monastic though emotionally rich folk bubble.

But I was never alone at the Fillmore. That’s where I met up with my tribe, and where a fellowship of souls gathered me up in the embrace of a redemptive camaraderie. The Fillmore West would only exist for a brief shining moment in time, from 1969 to 1971 and then it was gone, an ephemeral shimmer on the transitory landscape of my adolescence, it burned hot before it burned out.

Did we know we were listening to the legends of an era? Hell no, we were just having fun on a Saturday night. When Janis took the stage, sipping from a bottle of Jose Cuervo, and broke into Combination of the Two we knew we were in the presence of stardom. And when The Jefferson Airplane performed White Rabbit with Grace Slick standing statue still at the microphone but magnetizing the audience with the power of that masculine commanding voice, we did realize the glory of the moment. But most of the bands we saw had just formed; there were no legends yet.

Bill Graham always had three acts each night, and he liked to challenge his young audiences by mixing a blues band with a psychedelic act and maybe a folk-rock group or jazz musician. I saw Santana’s first concerts there, when no one knew the band was named after a guy named Carlos. Ditto with the band Cream when no one knew who Eric Clapton was. The Grateful Dead were often in the house and even then I used to marvel at their worshipful followers, not really getting it, because I liked 3 ½ minute songs and that wasn’t them.

When Dino Valenti of Quicksilver Messenger Service sang Fresh Air we all shouted along on the line “Have another hit” as we joyfully passed another joint. I loved seeing Sha Na Na there, a group that performed fifties classics in gold lame, leather jackets and pompadours. They were no amateurs, they were slick and polished, and their dance routines were sharply synchronized. I loved them because they managed to simultaneously revive and parody the 1950’s culture, at that time a mere 10 years earlier.

Tower of Power put on fantastic dazzling shows of real artistry, the saxophones and trumpets sizzling above the electric guitars. I saw Miles Davis on a bill with Elvin Bishop, Boz Scaggs headlining with New Riders of the Purple Sage. I saw Ravi Shankar weaving mystical Indian spells on his long necked sitar. And I saw Love perform the brilliant pop classic masterpiece Alone Again/Or. This was Carter’s favorite song and we always sang out loud the lyric, “I think that I could be in love with almost everyone.”

This was as good a summation of a 60’s philosophy as any. Sitting on that dirty floor at midnight in between Beth and Steve, or Carter and Diana, or Art and Laurie, buffered by their profound brotherhood, our bloodstreams saturated with THC, the kaleidoscopic light shows swirling all over the walls, and oh glory halleluiah the music, the life-altering soul-exalting transfiguring music that scooped us up on its magic carpet and carried us off into the glittering intergalactic night.

What a very sweet relocating of a couple decades that moved things and people forward to an uplifting beat that touches many of the bases I tagged around that circuit of life and sound that changed my mind, along with them other things that rattled our minds, especially, Viet-Nam and, less than, Civil Rights of those times. Thanks for it and peace love and understanding, with a wink and a smile.

This piece is simply awesome. Thank you Michael for transporting us back to our youth for a few minutes, it made my day!

Thanks for the memories.

Great writing, Michael!
My parents let me take that Chrysler Town and Country “boat” to The Rolling Stones free concert at the Altamont Speedway outside Tracy, California.I seem to remember having a full wagon with five or six people stuffed inside with two ice chests full of food, drinks and ice. Lots of blankets…December 6, 1969…52 years ago!

Wow, What a great story. And Steve, great to hear your voice here.
And thanks for the Dead tix back in early 80’s!

Great article! So many memories. Winterland was my favorite venue where I saw Jimmy Hendrix in 1968 with a date while in high school. Buddy Miles opened, followed by Steve Miller Band. And they would have shows in early ’70s where for $3.50 you might see five acts. One I remember was Dan Hicks and his Hot Licks, Quicksilver Messenger Service, It’s a Beautiful Day, Santana and Jefferson Airplane. Amazing concert!

Thanks for writing this and sharing your story Michael. Really enjoyed reading this. Alas, I was too young at that time, when my mom was driving up to the Fillmore from Menlo Park.
She certainly didn’t want to take my brother and I along at 6 and 9 years old.

They say the apples were laced with LSD. Nice to read the back story of Bill’s history with apples. I went to see Lucinda Williams there a few years ago and the apples were a waiting at the top of the stairs.