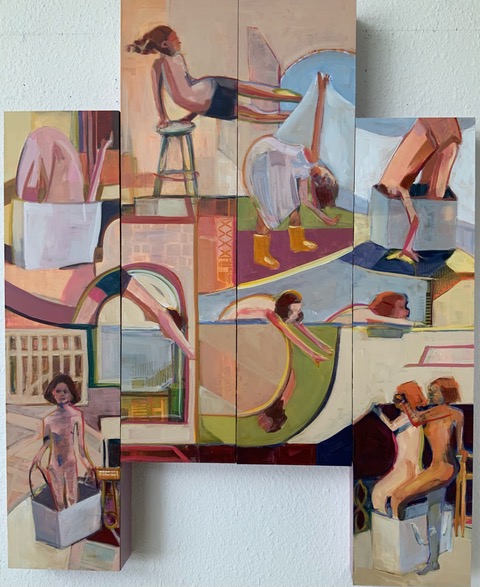 Walk into Cafe Zoë and you’re greeted by paintings of people going about their business in an exhibit artist Jill Andre calls Mainly Menlo. “They are from sketches I drew around town or nearby,” she says of acrylics on clay board art.

Jill explains that she’s been an artist her whole life. “When I was in kindergarten I drew rabbits in a carrot factory,” she says. “And as an adult nearly all of my jobs have had a creative component. I really shine when I get to be creative — especially when I can do it with other people.”

To that end, for a number of years, she took Edward Stanton’s Master Class through Stanford University’s Continuing Education Program known as the Drawing Circus. “What is unique is that the models don’t stand still, so it was like a performance,” she explains. 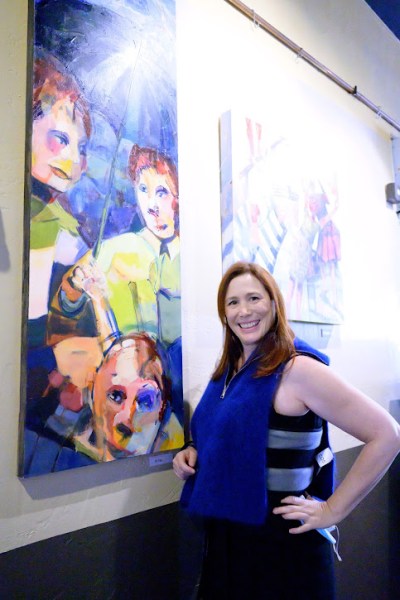 A Menlo Park resident since 1993, she is currently redoing her Willows neighborhood home while living in her studio in the City. “One of my first loves is architecture,” she says.

Asked about her influencers, she replies: “Certainly Wayne Thiebaud. I first saw an exhibit of his paintings in 1986 — it was pivotal. I didn’t know there were blues in the shadows! I did get to meet him, and he was good enough to sign some books I had of his.”

Jill says she find herself going in a more modular direction and this is evident in the Cafe Zoë exhibit. “They’re pieces rather than paintings as they’re made up of four panels. They stand alone and stand together.”

Jill’s artworks are on display through the month of March at Cafe Zoë (1929 Menalto Avenue). There is a reception on Friday, March 11, at 5:30 pm.