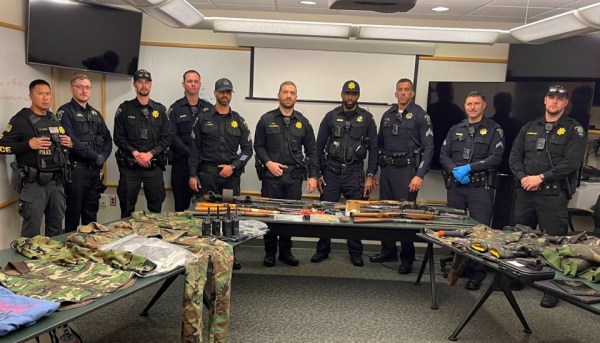 Menlo Park Police arrested a man this morning for the second time in less than two weeks. A traffic stop for speeding led to a gun seizure and arrest on March 20. Police searched the suspect’s home today and seized multiple illegal firearms and gang paraphernalia. The suspect had been out on bail since the afternoon of his original arrest.

On Sunday morning March 20, 2022 two Menlo Park Officers on patrol in an unmarked police vehicle stopped Christopher Echols, 42, of Menlo Park for speeding in the area of Willow Avenue and Newbridge Street in Menlo Park. This is an area known for numerous speeding complaints by the community, and the vehicle sped past the officers at approximately 50 miles per hour.

Officers contacted Echols, who initially attempted to report the officers via cellular 911 to another police agency in an attempt to target the plainclothes officers, telling the officers that they were in danger of being shot. Once officers were able to get Echols out of his vehicle, a loaded 9mm handgun was located on Echols’ person, as well as clothing indicating a local criminal street gang. Echols was ultimately arrested for several charges, including carrying a concealed firearm, resisting officers in an aggravated manner, false report of an emergency – with enhancements for his criminal street gang behavior and possession of a firearm by a gang member. He was booked into San Mateo County Jail.

In follow-up, Menlo Park Police Department authored a search warrant for Echols’ residence searching for additional weapons and evidence of gang activity. The warrant was served on the morning of March 29, 2022, in the 1100 block of Sevier Avenue in Menlo Park.

During the search, Menlo Park Police Officers seized 17 firearms, a large amount of clothing and other evidence of street-gang participation, police-style radio communication devices, and a large amount of ammunition. The weapons seized included assault-style and automatic firearms, and high-capacity magazines. Echols was again arrested on numerous firearms and gang-related charges.

California law allows for enhanced charging and sentencing when established gang activity and criminal activity are entwined. Today’s arrest and seizure of the 17 firearms and related evidence are linked to a criminal street gang known as the Taliban, which Menlo Park Police collaborated with East Palo Alto and Federal law enforcement to target and “dismantle” through a well-publicized operation that resulted in over 30 arrests for various crimes in 2009. Menlo Park Police are taking a proactive stance to prevent this type of activity from gaining hold in this community again.