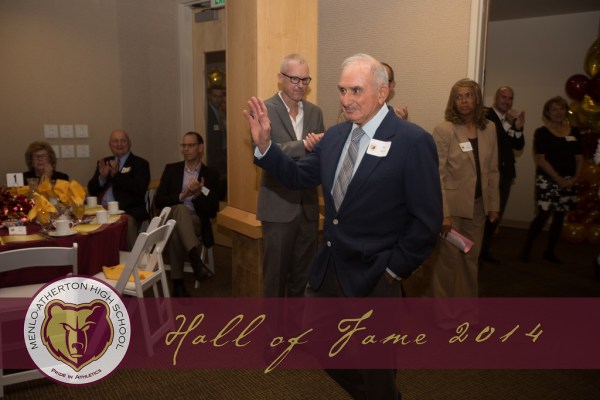 There will be a memorial service for former Menlo-Atherton High School coach Plato Yanicks on Saturday, June 4, at 11:00 am at Bridges Community Church, 625 Magdalena, Los Altos. There will be maroon and gold balloons on the church sign.

In an email to M-A P.E. teacher Pam Wimberly, his widow Marilyn wrote: “A reception will be after the service, which is supposed to be about an hour long. Dress is dressy casual.

“We’re hoping that many of Plato’s athletes are able to come.

“Also we plan to make a video with a link so that you can watch it wherever you
are. I hope to see you at the service.” 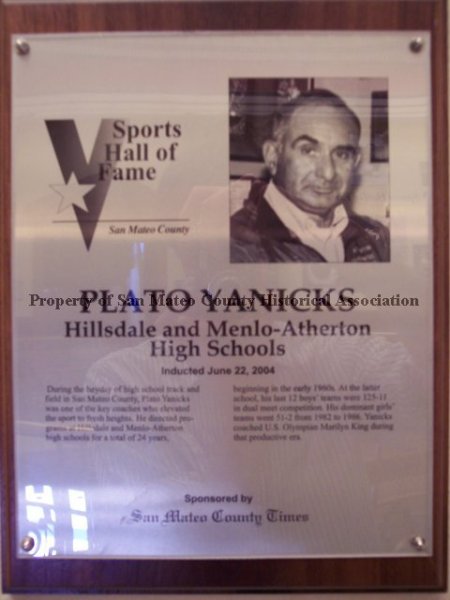 In the midst of his tenure as principal, Dave Theis approached Plato to inquire about the possibility of establishing a Sports Hall of Fame at Menlo-Atherton. The first induction ceremony took place in 1994 and Plato himself was inducted in 2014 (top photo).

He retired in 1994 as one of the most successful and respected track coaches in Northern California. He was responsible for founding the Cross Country program and instrumental in creating the CIF State Meet. Plato’s teams won 20 Varsity Championships. His teams posted over 300 wins and took second place at the CCS meet on three separate occasions. During his tenure, Plato coached 105 league and 14 individual CCS champions.

Plato passed away earlier this month at the age of 89.

Coach Yanicks thanks for all your many years of service at MA. I had Coach Yanicks for PE and cross country in 1977-78. Although we butted heads more than a few times, I think he was a great coach and taught me many lessons that are still with me today about the developing discipline and hard work.

I competed for Coach Yanicks from 1965-1969. He had a profound impact on my life as both an athlete and as a person. We continued to meet over the years although I’d moved to Washington state. His lessons of honor integrity and hard work formed my life. Jack Nevin Judge (retired) Superior Court Judge State of Washington.

I ran track on women’s team from 1970-74 for Ms. Miller. We shared the track with men’s team and Coach was a fixture out there! We were so fortunate to have him lead us for so many years. Thank you Coach! Many Blessings to your family and loved ones.

I had Coach Yanicks for 3 years in the 80’s. Great guy. I remember him making us run a lap if he heard us use his first name. He was a fair coach.

Unfortunately, I’m out of town and can’t make the service. Coach Yanicks was a very special person to me as I knew him my entire adult life. He was a great mentor to me, especially the years I was one of the track and field coaches at Menlo-Atherton from 1996-2001. He taught me the importance of how your team will take on your personality and to value dual meets as it got as many student-athletes involved as possible. During the time period I was fortunate to coach at MA, we won the vast majority of our dual meets and 16 out of a possible 27 team league championships.

I fondly remember the pride he had in Menlo-Atherton track and field and in the school itself and his work on the MA Hall of Fame is a testament to that. Similar to Coach Parks, Coach Bettencourt, Coach Wimberly, Coach Longyear and many others, Coach Yanicks had a legacy that impacted many lives in a positive fashion and he will always be remembered for the significant impact he made on Menlo-Atherton High School.

I am sorry hearing of his passing. He was a good man. He had a quiet strength. After gym class as a freshman, he invited me to come out for track practice. Low hurdles and pole vaulting became my weekly challenge- thanks Coach Yanicks!
Barry Young
Class of 1973
M-A Bears

I had Coach Y for freshman PE in 77. Asked me to come out and try the pole vault on the track team. That was a turning point in my life. He was always about his athletes. Helped me reach my potential- not just in vaulting, but in all aspects of everyday living. I will be there to pay my respects to a great teacher / motivator / friend.

Ran on his cross country team in the early 70’s, great man! Still have lot’s of fond memories of him. May he Rest In Peace.

I ran track and cross country from 1967-1969 at MA. Coach Yanicks was new then and let us chant PY when we won a meet. I remember hopping in the back of his station wagon when we went to run on the Stanford Golf course on summer evenings for Cross Country. i remembered him often when I coached my own teams in Henerson Nevada (but I coached swimming as I discovered I was a better swimmer than runner, though Coach Yanicks always encourged me) I am now Berlin Germany with my wife and pray the Lord’s blessings be with his family and friends.