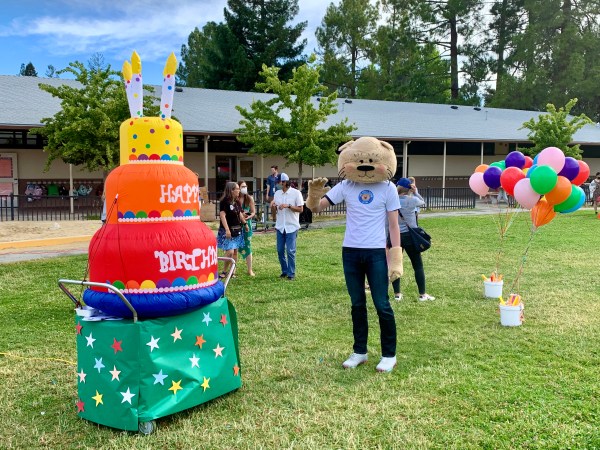 Ollie was on hand to greet students this morning when Oak Knoll School celebrated its 70th anniversary with festivities on the lawn that included bubbles, confetti, balloons, dancing and singing and an inflatable cake.

Capping off the festivities was Principal Alicia Payton-Miyazaki’s announcement — which arrived by drone — that Oak Knoll School has been selected by T4 Education as a Top 10 finalist for the World’s Best School Prize  in the category of Supporting Healthy Lives. Only 50 schools worldwide, representing 29 countries, including only three schools in the U.S., have been included in the shortlists. 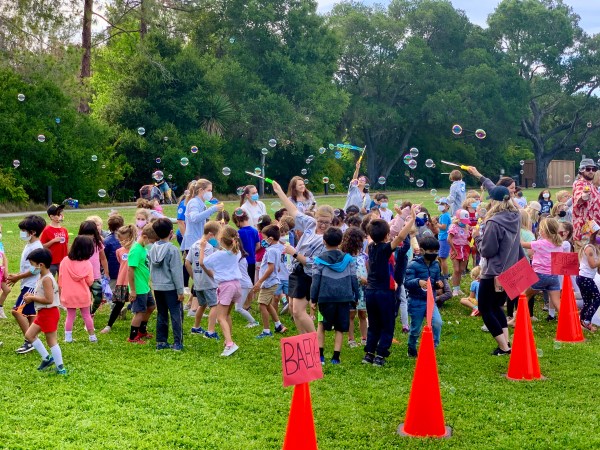 Alicia said in her announcement to staff that Oak Knoll is “truly creating the next generation of leaders, thinkers, and changemakers. Our students are wise, empathetic, empowered, and creative. I am thrilled that Oak Knoll’s work is included in this amazing cohort of schools.”

Central to Oak Knoll’s selection were the Green Team’s focus on environmentalism and sustainability including offering every student in grade 3-5 a bike through the Silicon Valley Bike Exchange. 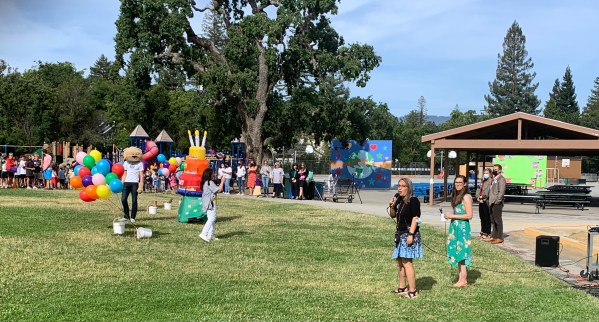 As part of inclusion on the award shortlist, Oak Knoll team members will have the opportunity to collaborate with other shortlisted schools. Already, Alicia has been on a call with schools from Africa, Europe, and South America, and she looks forward to sharing Oak Knoll’s work as well as learning from other schools in the cohort.

The Top 3 finalists for each of the five World’s Best School Prizes — for Community Collaboration, Environmental Action, Innovation, Overcoming Adversity, and Supporting Healthy Lives — will be announced later this year. After a public advisory vote, the winner of each Prize will be chosen based on rigorous criteria by a Judging Academy comprised of distinguished leaders. 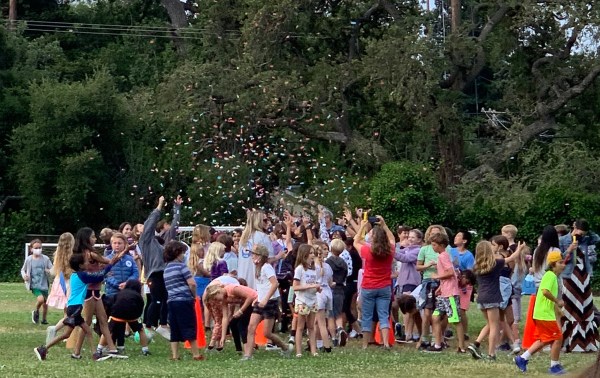 The winners will be announced in October 2022 at World Education Week. A prize of $250,000 will be equally shared among the winners of the five prizes, with each receiving an award of $50,000.

While the World’s Best School Prize is a new award, Oak Knoll celebrates 70 years of educating Menlo Park children with a focus on student advocacy and helping students discover and celebrate their individuality. Throughout their Oak Knoll journey, students learn to solve complex problems, work with others to make great things happen, know themselves, and care about themselves and others.

Founded in1951 as a K-8 school, Oak Knoll became a K-5 school  in the 1989/1990 school year. Oak Knoll has a proud history within the life of Menlo Park, Atherton, and East Palo Alto, the towns from which the schools’ students come.

“It is hard to imagine that we opened last fall with required social distancing of three feet and masking, and could not even serve coffee at our Thursday Community Coffee Events,” said Alicia. “Now, we have celebrated two musicals, and are preparing for Clap Out with all of our fifth graders together, cheering each other on. Truly, we will never again take community for granted.”

I am so proud to have called Oak Knoll my home for 25 years! The most innovated, environmentally conscience, and dedicated staff and administration. The atmosphere,as soon as you step on the campus, is filled with kindness. Most importantly, the students are happy! Congratulations Oak Knoll on your historic anniversary and award! I will always be an Otter! ❤️