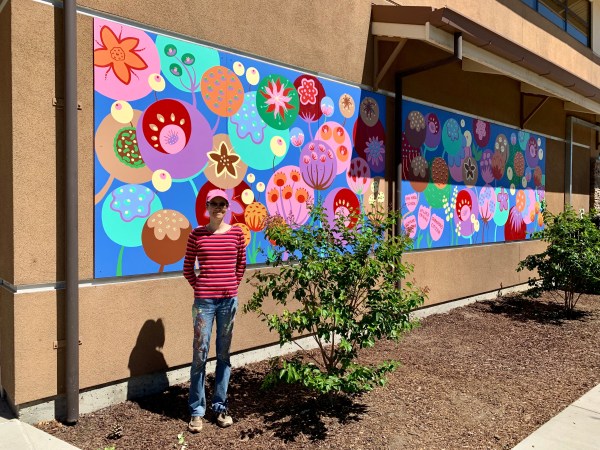 For over two decades artist Flo de Bretagne has been working on a series of murals that feature seeds, and her latest is now on display in the front of Oak Knoll School for not only parents, teachers and students to enjoy but the surrounding neighborhood.

“The series is about fruitfulness,” she explains. “It’s a metaphor for life. You plant seeds and they blossom into something magnificent. That’s particularly true in a school setting.”

Flo grew up in Paris and studied “what good students study” — business and tax law. But her heart wasn’t it it, and she spent four years at art school before starting her artistic career.

Her husband worked for an American company, and together they decided a move to the States was something they wanted to do. “I had an intuition that I would love it,” she says.

Her inspiration for the seed series is the short story The Man Who Planted Trees by Jean Giono. An allegorical tale, it tells the story of one shepherd’s long and successful single-handed effort to re-forest a desolate valley in the foothills of the Alps in Provence throughout the first half of the 20th century. “Little by little the forest grows and people return to inhabit the area,” she says.

Flo began painting murals at her children’s schools in Palo Alto, often with the help of friends and students at the schools. She then gravitated to schools throughout the Bay Area, mostly in low income areas.

A car accident forced her to stop painting for about two years but she’s returned to it, realizing that “I can do it if I don’t rush it.”

Oak Knoll principal Alicia Payton-Miyazaki eyed the location for latest mural so that it could be enjoyed by more people. “She wanted something that was really inviting, and hopefully that goal has been accomplished,” says Flo.

You can view Flo’s murals and other paintings for sale on her website.

Thank you for telling my story Linda and for giving the meaning of this mural. Fruitfulness, beauty and growth… Vive la vie! And congratulations to all the teachers, coaches, parents and even kids, who plant seeds.