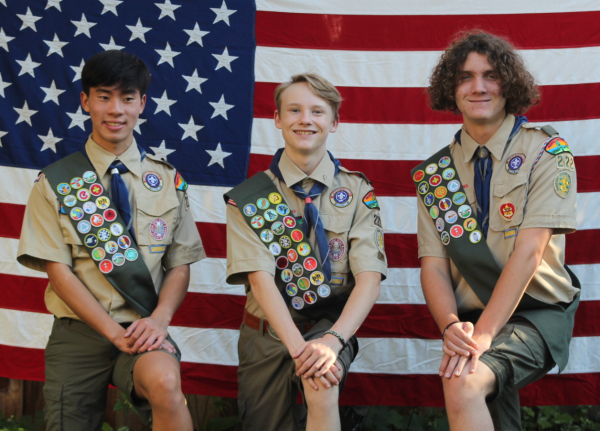 An Eagle must progress through seven ranks of scouting, developing skills and demonstrating leadership along the way. The Scout must earn at least 21 merit badges, 13 of which are specifically required, such as Citizenship in the Nation, Personal Fitness, First Aid and Environmental Science. To cap off the Eagle requirement, the Scout must perform an Eagle Leadership Service project that benefits the community at large.

“We are incredibly proud of our newest Troop 222 Eagle Scouts,” said Scoutmaster Stephanie Seeger. “I’ve known all these young men since they started as first-grade Cub Scouts and have seen them grow through the ranks and achieve this pinnacle of Scouting. I know they will take what they’ve learned on their Scouting journey as they go off to college and that they will continue to make the world a better place.”

Brandon Wee, the son of Andrew and Linda Wee, has held Scout leadership positions including Patrol Leader, Scribe, and Assistant Senior Patrol Leader. In 2019, he was voted by Troop 222 to become an esteemed national member of the Order of the Arrow. He earned his 100 miler award at Northern Tier, having canoed 100 miles in 10 days across Minnesota.

Brandon, a senior at Menlo-Atherton High School, is interested in studying bioengineering in college. He is a founding member of the Sustainability Committee at the San Mateo County of Education, and also rows with the Redwood Scullers in Redwood City.

Conrad Schroder, the son of James and Deanna Schroder, is a senior in high school where he started an investment club as a Junior. He plans to attend college in the fall of 2023. A classically trained pianist with 12 years of study, Conrad is also an avid alpine skier, backpacker and skateboarder.

During his six years with Troop 222, he served as Assistant Senior Patrol Leader, Patrol Leader and Troop Guide. Conrad attended the National Youth Leadership Training, received the Order of the Arrow, hiked over 200 miles on two Philmont Scout Ranch treks, and earned the 50-Miler Award.

For his Eagle Service Project, Conrad led a team who built six feeding stations for the Homeless Cat Network (HCN) that were placed around the Bay area to help HCN humanely control and feed the feral cat population and assist volunteers with their Trap-Neuter-Return program.

Henry Spooner, son of David and Renee Spooner, is a Menlo-Atherton High School senior interested in environmental science and marine biology. He plans to attend college and continue his academics in marine science.

For his Eagle Service Project, Henry refurbished the custom historical Suburban Park street signs over five separate construction days and a total of 400 hours. The project was a big success as 244 households in the beneficiary community are happy that the long-cherished character of the neighborhood is now preserved for years to come.

Email info@t222.org to join or learn about volunteering with Troop 222.

Making all of us proud Brandon, Conrad, and Henry!!

Congratulations Brandon, Conrad, and Henry! This is an achievement that you should be proud of, only about 8% of all Scouts achieve this top rank.
Never forget: once an Eagle, always an Eagle!