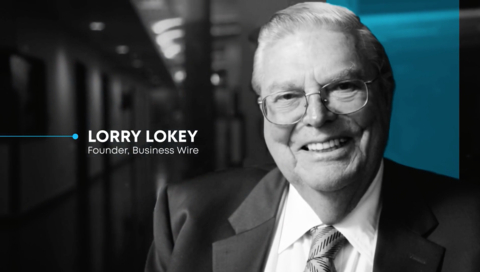 Having founded Business Wire in 1961, Lokey grew it from a single office in San Francisco into a worldwide communications leader up until it was acquired by Berkshire Hathaway in 2006.

“We are deeply saddened by the news of Lorry’s passing,” said Geff Scott, Chief Executive Officer of Business Wire. “He was a pioneer and visionary in our industry and a man of great generosity. We are grateful to Lorry for his lifetime of service and offer our condolences to his family and loved ones.”

In addition to his work at Business Wire, Lokey is noted for his significant philanthropic efforts around the world. In 2010 he signed the Giving Pledge and made numerous contributions to secondary and post-secondary education institutions and others, many of which have programs and facilities named in his honor. Notable gifts include those made to the University of Oregon, Stanford University, Mills College, The Technion, Santa Clara University, University of Haifa, and others.

Reflecting on his passion for philanthropy, in a 2010 letter to join the Giving Pledge, Lokey noted: “There’s an old saying about farmers putting back in to the ground via fertilizer what they take out. So it is with money. The larger the estate, the more important it is to revitalize the soil.”

Born in Portland, Oregon in 1927, Lokey attended Stanford University, from which he attained a bachelor’s degree in journalism in 1949. He also served in the US Army during World War II. One constant in his life was his love of journalism: from being an editor of the Stanford Daily to his work on the Pacific Stars & Stripes to an early job for United Press. Combining his journalism and public relations experience led him to start Business Wire.

Lorry was kind, generous, a real mensch and selflessly strove to carry out the Mitzvah of Tikkun Olam. He was very thoughtful, deliberate, and truly inspirational in his philanthropy. He was a joy to know and a blessing to our future and our children through his unwavering commitment to education. I feel so fortunate to have had the opportunity to know him. Karla Smith