Remembering a pool in Tehran 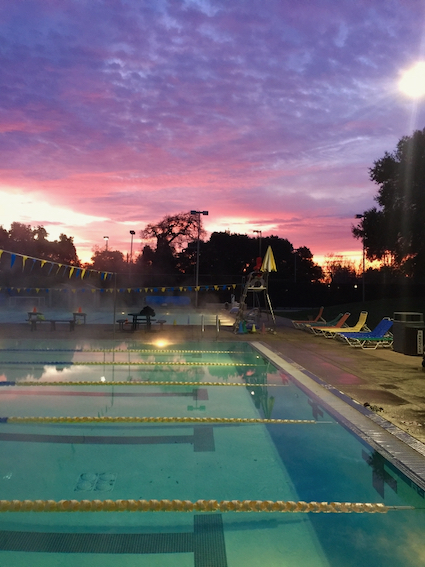 In 2010, I boarded a plane in Frankfurt, bound for Tehran. What made me take this trip to Iran? I had fled the country as a teenager, on the eve of the revolution, leaving everything behind. The house where I grew up was seized post revolution by the regime. Did I really think that the clerics would return our home? No, but I had come with my sisters to try.

Iran filled me with dread, and despite reassurances from friends who’d made the journey multiple times, I was on edge throughout the flight. A half hour before landing, I took my lead from the ladies pulling headscarves from their bags, and I fumbled with mine until the kind woman sitting beside me offered a quick tutorial.

I heard my mother’s voice in my ear: What nonsense! She, a champion of women’s rights in Iran during the reign of the Shah, had condemned the hijab law. I looked out the plane window at the city lights, thinking of everything that she fought for and lost in the course of her life: the right to divorce, to travel without a father or husband’s consent, to equal pay, rights that a new generation would never know. The house was the least of her losses.

I emerged from the jetway in a long black overcoat with one end of my headscarf clenched between my teeth lest it slip off. Standing in line with passengers waiting to show our papers to the border police was a scene from one of my recurring nightmares where I had lost my passport or I was taken into a cell for questioning. Everyone held their bags and documents close to their hearts, eyes downcast, their mouths clamped shut. When my turn came, the guard coolly assessed my crooked scarf, stamped my passport, and waved me off. I walked away in a cold sweat.

My immense relief after all that pent-up fear brought on a tidal wave of emotion. Tehran was not the city I left decades ago, but oh, it smelled the same! Diesel and wet asphalt. In the back seat of the taxi driving away from the airport, my nose to the crack in the window, I inhaled the scent and cried. In the first twenty-four hours I was constantly close to tears. This was a homecoming, but we had no family to come back to.

At a small, family-run hotel, we were greeted warmly by a young woman, elegant in a maroon manteau, her hair swooped into a cone at the crown and wrapped in the same fabric as her uniform. None of my questions seemed to surprise her but her kohl-rimmed eyes widened when I asked about the nearest pool. You mean to swim? Yes. It turned out that there was indeed a community pool about a mile away. She drew a map on the back of a brochure, warning me of the limited hours. As in, the women’s hour: 9:00-10:00 A.M.

The phone in our room rang at seven, startling us awake. My heart hammered in my chest, certain that I was about to be arrested. I’d asked for a wake-up call but jet lag had jumbled my memory. I came undone hearing the sweet voice from the night before telling me the time. If I hurried, I’d make it to the pool and be back before they put away the breakfast buffet. Anxious for exercise, I threw a swimsuit in my backpack and headed out with a vague idea that I’d blend in but next to the women in stylish manteaus and high heels, I looked every bit the foreigner in my oversized coat and oafish backpack.

I approached the façade of the building covered with a dark panel of fabric. Even the door had to wear a cloak for ladies’ hours. Scornful of the regime’s absurd discrimination, I pushed the dour cloth aside to enter and stood for a moment to breathe the saturated scent. As a swimmer, I am fond of the thick smell of chlorine.

Standing in the front office was a young clerk, her long, auburn hair unraveled, holding a fresh loaf of bread. While I paid the entrance fee, she collected my cell phone in exchange for a locker key and my eyes wandered past her bare shoulder to the voices behind the desk. Two attendants in tank tops and shorts sat at a small table, waiting for their colleague to join them. A kettle whistled. It was still early and I had interrupted their breakfast, the rare half hour when they could sit unencumbered by veils, rules, and threats, to eat and chat freely. Yet here was their first customer with only one selfish thought — to tear her silly scarf off and swim laps.

I rushed to the changing room, apologetic but filled with an intense desire to sit with them, feeling such affection for them, wanting to know what kind of lives they led. My middle-aged American self was already snapping goggles in place, while the Persian girl who left thirty years ago wondered if they might call out to her, if they had saved her a seat. I shivered at the edge of the outdoor pool while a voice inside my head told me to throw myself in. For a few seconds, with my head underwater, I pushed through, giving it my all. Gasping when I reached the wall, I looked up at the sky and realized that I was not afraid. I was safe here in this pool, in the clean blue grid of orderly tiles, and I felt strangely close to the three women at their breakfast table.

I returned every day with such a need to endear myself to these women. Their recognition after my third or fourth visit gave me such pleasure. They smiled at me as if to say “It’s you!” My cap and goggles set me apart from leisure swimmers. Amused and maybe a little curious about all that dogged lap swimming, Sarah, the youngest, asked if I was some kind of coach. This made me laugh out loud. I thought I saw the faintest worry in her eyes. Women being jolly in public was frowned upon. Then she laughed, her bright teeth like flares. Nobody’d hear us here. For one sacred hour, within the concrete walls of a municipal pool, we were free.

On my last day in Tehran, I stopped to buy cream puffs on my way to the pool. “I’ll come see you again,” I said, wanting so much to believe it. Sarah, her straight black hair in two braids, stretched across the counter and touched her lips to my cheek. Such a warm gesture stopped my heart. I went from stranger to sister.

I would never see my childhood home again, but my return to Tehran was not a futile journey. Daughter, what took you so long? I imagined hearing from the very soil. Twelve years have gone by, and still I can bring back the details of those mornings: the faint chill in the air, the sidewalks washed clean of dust, the heavy weave of the black curtain that covered the entrance to the building. I can almost reach out and pull it. The first smell of chlorine dissolving my fear.

I have never been able to get the image of those three women out of my head. I feel an obligation to them. They return again and again as characters in my novels: Lily accompanies a young man to the pool disguised as a boy. Marjane leads the suffragettes in 1963. Yasmine is on the run after participating in a Marxist rally. Sometimes, I can even bring back my old self, the zealous lap swimmer who had the air of a foreigner, which she was, and wasn’t. I want to always remember that in the company of those three women, I wasn’t the least bit scared. I see them now, outside the walls of our pool, marching in the streets, burning their headscarves, defying riot police, sacrificing their lives. But seeing is not the same as risking bullets. Exile is its own kind of cowardice.

Menlo Park resident Donia Bijan is author of a memoir “Maman’s Homesick Pie” and the novel “The Last Days of Cafe Leila”, an Amazon Editor’s Pick. She is a frequent morning swimmer at Burgess pool (pictured)and will appear at the Menlo Park Library’s Local Author Event on Saturday November 19, from 1:00 to 4:00 pm, 800 Alma Street.

As always, your writing is beautiful and sensitive, Donia. Thank you.

Thank you so much, Cathy.

What a beautiful, emotional “read”. We take so much for granted here and are disappointed as well from time to time. I’m so glad you published this.

Thank you for sharing this beautiful and heartfelt essay! I truly felt all your emotions from tears to joy.

Thank you so much for reading my essay. Writing about Iran is a lot like swimming in turbulent waters so I receive each comment like a lifesaver.

Donia absolutely stunning and palpable!! Thank You for sharing your beautiful gifts with us!

This writing truly touches my heart as your earlier books did. What a beautiful talent you have. No wonder Heidi cared so much about you. She would have cried reading this.

This is absolutely beautiful.

So Beautiful! I felt as if I were there with you!! Much love, melanie

I absolutely love your writing ❤️

What a beautifully painted story! You took me with you on your bittersweet journey; your longing and belonging became mine, and I felt homesick again!
Love you and miss you❤️

I could envision it all. Although I have never been to Iran, I felt like I was there with you!
Donia, you are a woman of many gifts. Thank you for sharing such a heartfelt essay. It is the essence of you.
Fondly,
Nancy

Like Martha did and Heidi surly would have, I am finishing this with blurry, teary eyes. We were recently in Turkey and wondered often if Erdogan could manage that reach, doubting it possible in such an cosmopolitan country but then Tehran was modern and vibrant and cosmopolitan …Or if this country could do its own version.

You are a beautiful, heartfelt writer Donia, and you remind us that we are all part of the same humanity.

And remind us of yet another reason we value our swims!