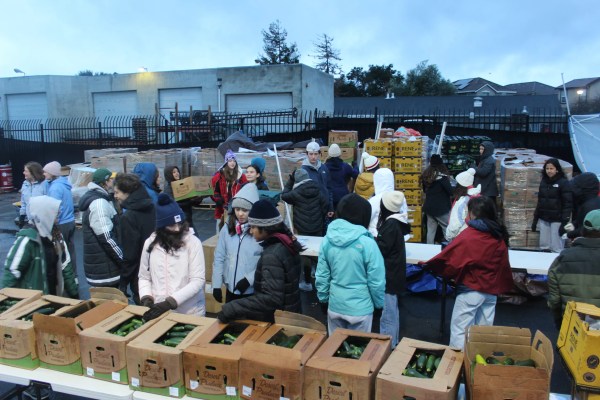 On Saturday, December 10, Menlo-Atherton High School volunteers came together early in the morning to package and distribute 335,000 pounds of food to local families at Ecumenical Hunger in East Palo Alto. Distribution Day (D-Day), a unique M-A tradition, has been a staple of the school’s Leadership class for decades.

Senior Erin Young, the ASB president and co-chair of the Distribution Day committee, believes that D-Day is one of the most impactful events Leadership puts on. “What first comes to mind when I think of Distribution Day is how Leadership shows up at 6:30 in the morning, while it is still pitch black outside, and there’s already people lined up in front of Ecumenical Hunger,” she said. “Our school isn’t known to be a very spirited school, but when it comes to the Canned Food Drive, there’s people I’ve never seen before coming up to me in B-21 saying, ‘Hey, can you tell me more about Distribution Day? What can I do to help?’ and that’s something really special.”

During Distribution Day, volunteers spend most of the morning packaging bags full of produce and protein that come from grocery outlet orders and M-A’s partnership with Second Harvest Food Bank, a program that works to provide material help in the form of food and clothes, as well as foster lasting connections and friendships with those in need. Volunteers lay bags of food out in rows to package into orders. Depending on the size of the family picking up donations, volunteers gather a certain number of bags and boxes to then transport to their cars.

With so many pieces of preparation that went into the day, here’s a breakdown of the events which made it possible: 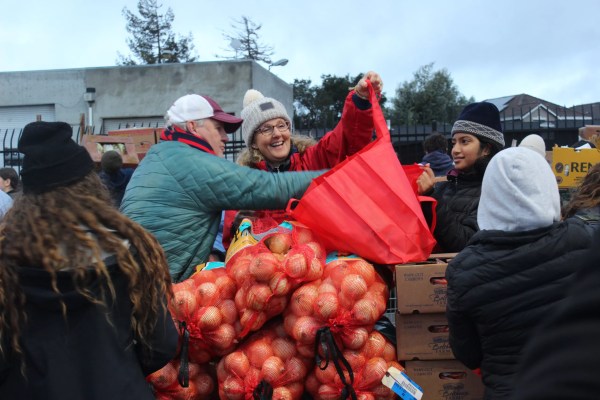 Within just over a month of canning for donations, M-A students have worked hard in raising the food distributed to families on this one day. “It’s a really cool feeling to know that when you go canning on a Saturday afternoon for two hours, it’s actually making a difference in people’s lives,” said sophomore Abbie MacLeod, a member of the Distribution Day committee. All Leadership students can for at least 20 hours.

Senior Luka Perazich put together a list of families to receive food on D-Day. He said, “We contacted well over 400 past contacts, of which 200 responded. It adds up to well over 1,000 people within the families who were expected to show up.”

“We put in so much work, and we do it because we enjoy it and we want the rest of the school to get involved to help our community,” said Young.

But it’s not only food donations that help put the event together. “I don’t think many students realize this, but the cash we raise every year supports programs like Ecumenical Hunger throughout the entire year,” said Nelson. “Through our efforts, we’re going to continue giving food and supporting our community for months to come.” 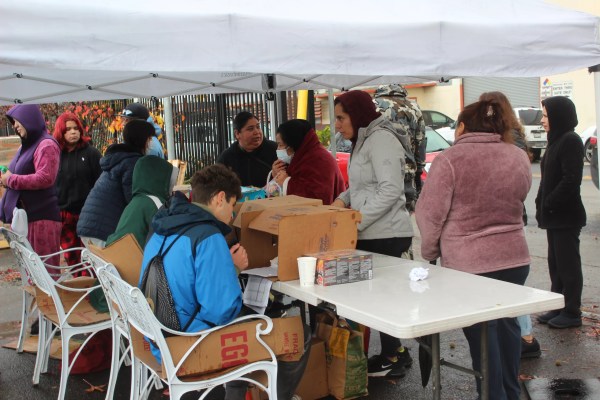 6:30 am on Distribution Day – Call time for Leadership students

Leadership students arrived early in the morning, before most volunteers, in order to set up the assembly lines and get the packaging in motion.

“We just got here, it is 6:30 in the morning, and the sun is yet to come up. We already have families lining up to get their food, so we can’t wait to jump in here and start sorting,” said committee member and senior Simone McCreary as students began setting up.

As a favorite event Leadership puts on among the students, sophomore Zoe Fong said, “Distribution Day is one of my favorite events of the season. One of the biggest reasons why I joined Leadership was to be more involved in it.”

“When one gives with love, it’s received with love. I think this event resonates through the whole school,” said Service Learning Center Staff Director Andrew Stuart.

This love for the event does not stop at the end of high school. Rachel Warsaw, an M-A alumni who came to help out with Distribution Day, said, “Leadership was a big part of my life when I was at M-A, and Distribution Day was always my favorite event. I got here around 8:30 am and bagging was basically already done. I’ve never seen it be done this fast. It’s incredible. The committee clearly did a great job.”

Warsaw wasn’t the only returning M-A student who came to help out. Nicholas Nolasco, the 2017 Senior Class Advisor, said, “The Canned Food Drive is something really unique and special. Once you leave M-A, you don’t see much like it unless you look for it, so it’s really fun to come back and help.” He loves the moving parts of Distribution Day, “bonding with my friends, getting to know the people, and learning about their stories.”

Leadership Activities Director Michael Amoroso is impressed by what Leadership students put together every year. “My favorite part of Distribution Day is watching a group of teens put together an event that benefits the community much more than we can actually realize,” he said. “I cannot thank everybody enough who is here today and all the students of M-A who have donated all the cans to help this great day happen.” 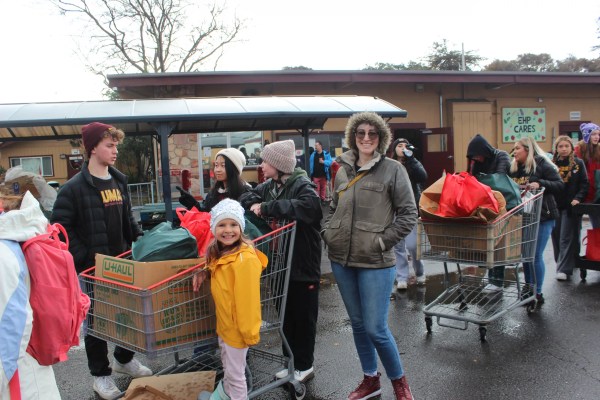 “The most impactful part of the whole event is being there with these families and hearing their stories as you’re walking to the car,” said Young.

And this event could not come at a better time, as Nelson explained. “It’s right after one major holiday and right before another, at the end of the fiscal year when a lot of times bills are coming short,” he said. “That’s the moment that we come in and give people food so they can save money on their costs.”

As the rain increased during the second part of the event, volunteers kept their enthusiasm up, having fun with music. “Everything’s flooding because of the rain, but the music is keeping spirits high,” said senior Gigi Edwards.

David Wagstaff, an adult volunteer who contributes to Ecumenical Hunger events but partook in M-A’s Distribution Day for the first time this year said, “The music, the dancing, the energy—it’s all really fun and special. I’ve never been a part of anything like it.”

Additionally, Kat Keigher, an AS English III teacher, said, “I’m very pleased by how many people are still here helping out even though it’s raining and cold.” She said, “I think the most important thing about Distribution Day is understanding the diversity of our community and making that real with action, not just a motto, and making sure that we are connecting with all parts of our community in a variety of ways. Not just in certain neighborhoods, and not just in certain activities.”

Keigher also brought her kids along to help. Eight-year-old Henry Keigher said of the event, “I like it more than Christmas!” He has been helping out with Distribution Day for four years. “I’m happy to be here and meet so many new people,” he said.

Referring to the event in its entirety, Amoroso said, “There is one thing I would like for everybody to know about Distribution Day: While we do raise over 300,000 pounds of food every single year, hunger doesn’t stop in December.”

Author Sidney Loftman is a senior at M-A; this article originally appeared the M-A Chronicle; used with permission.

Great article, Sidney! Thanks to all the M-A Leadership members, students, alumni, teachers, and volunteers who braved the elements and worked so hard to make Distribution Day so special and impactful. Very inspiring!!!