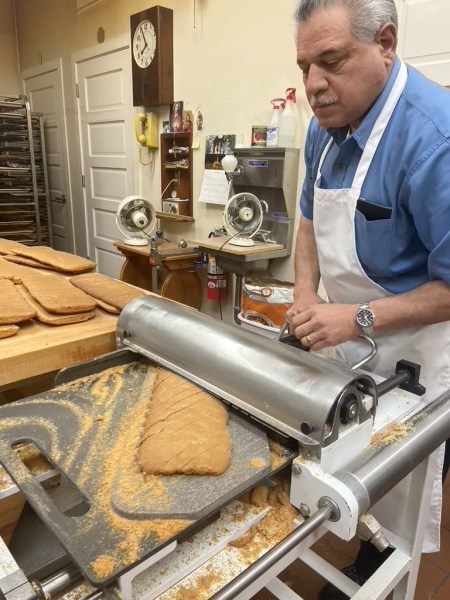 Augustine Buonocore and his five-person staff start work at 2:00 a.m. every Monday to Saturday of the holiday season in his small commercial kitchen connected to his retail store, La Biscotteria, at 2747 El Camino Real in Redwood City. During the rest of the year, they work from 5:00 a.m. to 5:00 p.m., baking pounds upon pounds of plain and chocolate-dipped biscotti, almond tortes, and amaretti cookies.

Buonocore’s family has a history of baking: his grandfather co-owned the San Francisco-based California Macaroni Company, and his grandmother passed down her recipe book, which he still follows to this day. He said: “I’ve been baking with my family since I was a kid. In 1989, I purchased a small commercial kitchen in Belmont that made cheesecakes. Eventually, I phased out the cheesecakes and used that kitchen to bake biscotti wholesale for supermarkets like Draeger’s and Safeway, wineries, and farmer’s markets. The farmers’ markets were how I first got my name and product out there.”

In 2003, Buonocore built his current store on El Camino. He said: “Once I opened this store, I started doing not only biscotti but also panettone during Christmas, amaretti cookies, breadsticks, cannoli, almond tortes, gift baskets, and on Saturday we cook focaccia bread.” He also ships his products nationwide from his website. 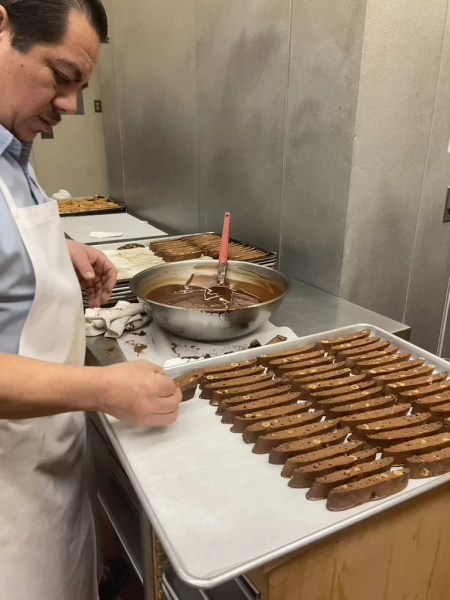 Buonocore showed me his kitchen as he wrapped up the day at 5:00 p.m. There were 35 sheet pans of cut blueberry biscotti inside his revolving oven to bake overnight at low heat so the fruit doesn’t dry out. He said: “Biscotti means twice-baked, so first we bake logs, and then we slice them and put them on their side to bake them a second time on very low heat. We dip some in different chocolates to complement them, and then we package them. It’s a very repetitive process.”

The next day, at 7:45 a.m., I showed up to watch him cut his fan favorite—anise biscotti—to be baked for the second time. When I got there, his staff was taking biscottis out of the oven, brushing them with butter, slicing them, and dipping them in chocolate. “The fruit biscottis are cut by hand, and the rest are cut on this machine,” he said, pointing to a machine that cuts 18 perfect slices.

A large value for Buonocore is ingredient quality which is essential for him. He said: “What sets us apart from other stores with biscotti is the quality of our ingredients. We use essential oils for flavoring while other places use extracts, which are a little essential oil and the rest is alcohol. When you bake the biscotti, the flavor stays in and it doesn’t evaporate. We also use pure German chocolate and organic ingredients. Our biscotti doesn’t break when you dunk it, and it’s crunchy on its own.

“La Biscotteria is one of the only biscotti-specialized bakeries that have survived. Most of my staff has been with me for 27 years. We are like a family.”

Stop by La Biscotteria or get some biscotti shipped to your house for a great treat this holiday season or any time.

Author Celeste Zucker is a sophomore in her first year of journalism at Menlo-Atherton High School. In her free time, she likes hanging out with friends, rowing, and spending time in nature. This article originally appeared in the M-A Chronicle, used with permission.