Looking back at the flood that happened 80 years ago today 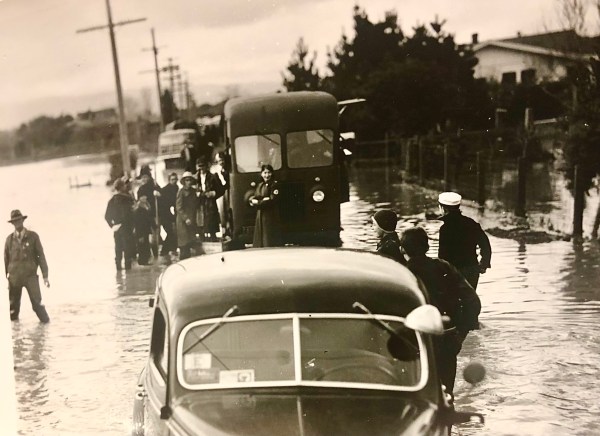 On Saturday January 23, 1943, at 2:57 am, eight on-duty Menlo Park Firefighters from all three of its Fire Stations located in Menlo Park, Atherton and East Palo Alto were called out to a reported levee (or dyke) failure along a rain swollen San Francisquito Creek on to the Peter Fabel Dairy Ranch located in East Palo Alto…”swelled by high tides backing up between 2:00 to 3:00 am, with torrential rain fall resulting in waters reported as high as 3 to 5 feet around homes and trapped by the sudden flood and levee failure”.

Information acquired from the Fire Districts’ archives consisting of Station Day Books and Annual Report from 1943 along with never before publicly seen historical photographs and saved news clips located in Mrs Cuffs “Green Wall Paper sample book“ and from the Times Redwood City Bureau and another unnamed newspaper have helped piece together one of the oldest and most complete records of actual rescues, flood impacts and dramatic measures involving multiple entities, including the military, along the San Francisquito Creek. Read one headline: “East Palo Alto Under Water – Levee on Bay Dynamited!”

The news clips reported that an area covering 250 acres had flooded the southern San Mateo County community. “Men, women and children were rescued from their flooded homes by Menlo Park Firemen and Sheriffs Deputies in rowboats, and the army sent a dozen soldiers from its Page Mill Road Camp with specially equipped trucks to aid in the rescue work.” 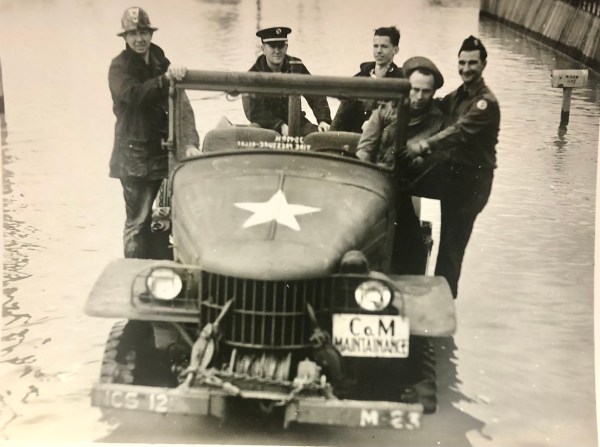 The 1943 Fire Station 2 Day Book and call log reference that Firefighters were first called out to Beech Street and Pulgas Avenue at 2:57 am. The call was described as a “Service Call — Several houses flooded — Chickens and stock removed”. One of two Trucks responded with two on-duty personnel from Fire station 2, located at 2084 Manhattan Avenue (now the off-ramp for Highway 101 NB at University Avenue) before Fire Chief Cuff called out the two remaining Fire District Stations, using all three remaining fully staffed response units with six personnel, or two per unit. (Two additional response units remained in reserve, one in Atherton and East Palo Alto).

The Fire Districts 1943 Annual Report describes the conditions: “In January, winter storms were the cause of a flooded area in the East Palo Alto section of the District. Men and equipment took part in evacuating people and live stock from this area. During these activities, our (new) short wave radio played a prominent part in summoning aid from the US Army (garrisoned in Palo Alto during World War II) and Palo Alto Yacht Harbor. Our portable lighting system also had an important part, being very helpful in making a survey of the area in order that men and equipment could be dispatched to places where most needed”. 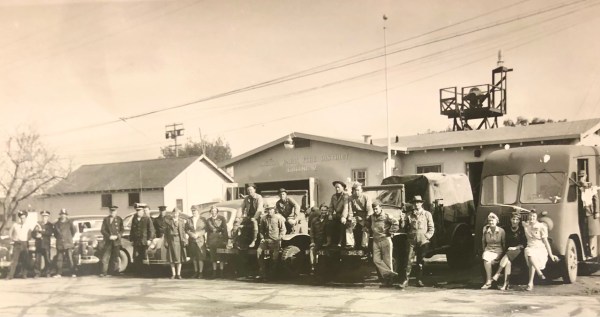 The Times reported “Fire Chief Tom Cuff of Menlo Park estimated that nearly 40 houses and small ranches were isolated in the stricken area between Bayshore Highway and the Bay”. Fire District Station Day Books from all three Stations show firefighters responding to service calls to several homes across the District in the days leading up to the levee break to pump out basements affected by rain waters.

According to the 1943 Annual Report, the Fire District responded to 279 emergency incidents that year. The District consisted of 14 full time response personnel, including the Fire Chief, and 5 reserves. Staffing during World War II remained a challenge with high turnover due to voluntary military service and being understaffed by at least six full-time Firefighter positions.

A separate unnamed news clip from what appears to be a Sunday newspaper reported that “E.G. Stein, San Mateo County Sanitary Inspector, banned the use of well water in the flooded district, approximately three-fourths of a mile square, until further notice and ordered immediate burial of all animal corpses. Hundreds of chickens, rabbits and pigs were drowned in the overflow of San Francisquito on Friday night and Saturday.

“Mrs. Lesley Rudy, home service chairman of the Redwood City Red Cross, said that most of the evacuated families were back in their homes, six on Beech Street, five on Garden, two on Runnymede, and one on Weeks. Eleven other houses were damaged by water.

“County Engineer M.A. Grant disclosed that the area is at the mercy of further rains or high tides because protecting dykes were blasted Saturday afternoon to allow the flood waters to reach the Bay. Equipment cannot be moved in to repair the dykes until the ground is dry.”

As they say, history repeats itself. It’s well to keep in mind events like this. Thanks for posting.

Interesting how fast folks forget about the January and February Rains – and high tides Seems to happen every thirty years or so. If one were to take the time to examine old growth trees that have happened and study the rings you will see that there are very wet years followed but extremely dry years. Nothing new really it is just nature in this area and most of California.
People call it climate change but in reality, it is the normal course of nature for the area.
Great photos and story!