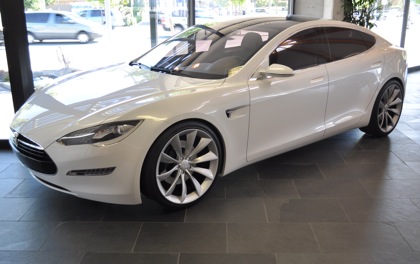 This model is actually a prototype built for exterior photography, so we couldn’t actually sit in the unfinished interior, much less drive it, but the car is promised for 2011 or 2012 delivery (you can reserve yours today).

Tesla, which announced that it has now shipped 500 of its $100,000, 2-seat roadsters, thrilled Menlo city fathers when it took over and nicely rehabbed one of the five vacant car dealerships that line the east side of El Camino.