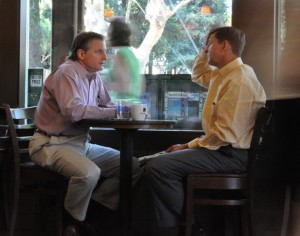 The conversation between two locals at last Wednesday’s concert in Fremont Park went something like this: “I’ll bet that Peet’s has been there for 40 years, no, maybe I’m giving  it 10 years.” ” Hmmm. I’m guesiing it opened in the late 70s – I think 30 years is more like it.”

While InMenlo has yet to pin down the opening date (the original Peet’s opened in 1966 in Berkeley) we do know this quintessential A.M. hangout has survived numerous remodels and even a recent fire without losing a fanatical following of ‘Peetniks’ who proudly proclaim, ‘Friends don’t let friends drink Starbucks.’

Morning throngs are dense and often spill over onto the sidewalk benches at the corner of Santa Cruz and University, despite the improved customer flow in the most recent remodel. Many locals despaired when Peet’s opened a second Menlo location, so much so that signs were posted in the original downtown spot assuring customers that there were no plans to close the original, a classic Menlo Hangout. Even though the WiFi has been down since the fire a couple months ago, this downtown anchor shows little sign of waning popularity.