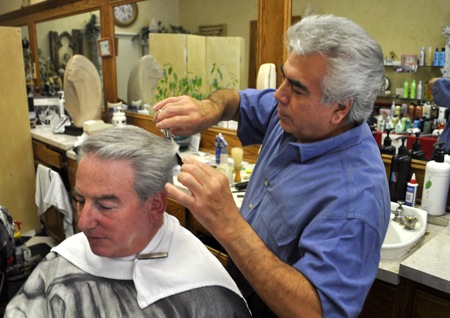 15,000 haircuts, and more than 30 years into his tenure in Menlo Park, hairstylist Moses Moreno is the preferred sartorial provider for a large and steady contingent of CEOs, venture capitalists, doctors, Stanford types and, even, just plain folk (like the Google guy who computed the haircut total.) Moses has plied his trade for 22 of those years at his current location at 1110 Crane Street, a few steps from Santa Cruz Avenue.

“Everybody has different hair growth,” notes Moses, and adds “you have to work with the shape of the face and head, and the indivivual’s goals… dialog is important!” Which sounds a lot like a good old-time barber to us. Moses’ popularity and trade is such that he was able to cut back his longest shifts some ten years ago and still keep really busy. His business sense is as astute as his eye for an unruly cowlick – he asks new customers how they’ve heard of him, and reports that word-of-mouth continues to be by far his best medium (he still keeps an ad in the yellow pages, but it’s “targeted differently” these days.)

Moses says he thanks his father, an immigrant farm worker, for advising his sons to ‘learn a trade’ to escape the hard field work in Salinas, then the family home, and would point to Manny, a barber in the town. “Manny, dad would say, works inside, where it’s warm.” Moses clearly heeded the paternal advice, much to the delight of his legion customers in Menlo.

The InMenlo staff mathematician points out that 15,000 haircuts (at Moses’ current location) works out to only 16 haircuts a week, or about 3 per day (assuming a 5-day week.) Given Moses’ usually busy shop, our wiz (Al Einstein) posits that the total on Crane St. is at least 33,000 ‘cuts and possibly a fair number more.

Asked about the large discrepancy between his estimate and that of ‘the Google guy,’ Al responds that Google often underreports results as a way of keeping their algorithms secret.