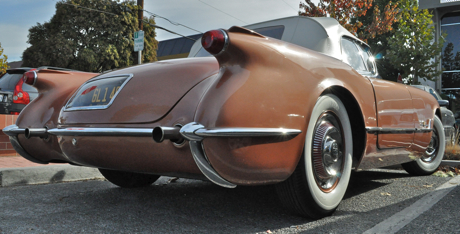 The 1953 Corvette was the first model in a product line created by a GM on the rise to its once-dominant position as the world’s largest, and richest, car maker. Despite the parent company’s recent travails, the Corvette brand continues more than a half-century later.

GM was reportedly targeting young men, who, flush with the proceeds of post-war boom America, were turning to (gasp) foreign imports for want of an American offering in the ‘sexy’ two-seat convertible category. The original ‘Vette was not intended to be a muscle car – it was powered by a relatively docile 150 hp six (today’s Corvette comes standard with a 435 hp V8, and offers 638 hp as an option). Rather, it was meant to be a fun drop top two-seater, just the ride for you and your date.

This car, spotted recently in Menlo municipal parking, has some mild custom touches – no visible door handles, for one, and a very spiffy interior, for another. Even the license plates appeared to be carefully crafted to jibe with the car’s 1953 origin.

I think it’s just a 1955 Corvette but I wonder if the side logo is the big V one “CorVette” indicating it’s a V8 car.
Colour could then be the very rare copper : 15 made.