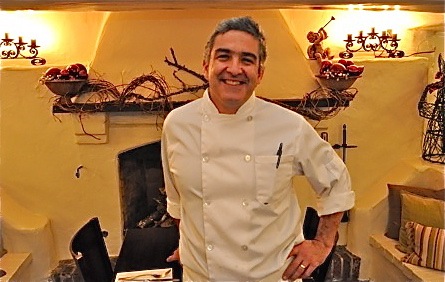 Greg Russi, chef at Cafe Primavera at the Allied Arts, has a confession. “I grew up in Los Altos Hills so I didn’t know about the long tradition of the lunch/tea room at the Allied Arts Guild,” says the now Menlo Park resident. “But both my mother and my aunt quickly filled me in!”

Russi is midway through his first holiday season the helm, which includes the annual children’s party the first weekend in December, teas and private dinners. (Cafe Primavera, under the ownership of Joanna Biondi, opened in September.) Keeping up with the hectic schedule means he’s only now starting to look to  the future. He’s interested in exploring the idea of wine dinners, which he enjoys putting together, and is starting to wade through the rule book that applies to events at the Allied Arts.

“The space – and the tradition of the place – is phenomenal,” he says. “The people here are extremely nice, not to mention the four resident cats.”

Greg is comparable to the head chef at the best restaurant you’ve ever eaten at! I’ve evjoyed too many of his very fine meals… and can’t wait for the next!

Grade A stuff. I’m unquestionably in your debt.