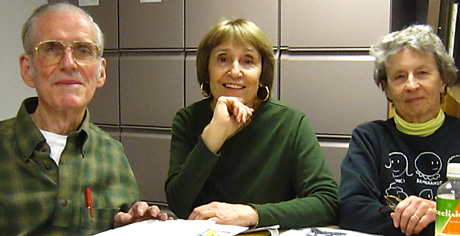 A visit to the Menlo Park Historical Association really brings Menlo Park’s history alive – as we learned when we met with Frank Helfrich, Lydia Cooper, and Anne DeCarli (left to right above) at the MPHA’s densely packed room in the basement of the Menlo Park Public Library. Frank, affectionately known as the “guru of Menlo Park history” was born in Menlo Park some 81 years ago. Lydia reached out to us suggesting a visit – and what fun it was!

Knowing we were coming, Frank had done some research on the oldest buildings in Menlo Park – including the GateHouse (built in 1864) and the Bright Eagle on Noel Street (built in 1869). We talked about his memories of the Sharon Mansion – on the hilltop that’s now known as Sharon Heights. Anne, an archivist for the MPHA, said that “you could barely see the mansion from Sand Hill Road but, from the mansion itself, you could see everything!”

The historical association itself was born in 1971 – and will be celebrating its fortieth birthday next year. The group, with over 200 members, holds several public events each year – a Chinese dinner upcoming next month, an Ice Cream Social in the summertime, and its Annual Meeting with an interesting local speaker in November. Last year’s speaker was Menlo Park Fire Chief Harold Schapelhouman who was a big hit with the group!

The MPRA has lots of contributions, all carefully organized and indexed, from many long-time Menlo Park families and businesses. A large collection of historical photos, including a major contribution from Elmo Hayden who used to own the Menlo Park Camera Shop, is in the process of being scanned and digitized to allow online display in the future.

If you’re looking to learn more about any aspect of the history of Menlo Park, the MPHA – and the people involved – are a rich resource! The MPHA office is open to the public every Tuesday from Noon to 2:oo pm and every Wednesday from 10:oo am to 2:oo pm. You can join the MPHA and receive its quarterly newsletter for $20/year ($10/year for seniors). You can contact the MPHA via email at: mphistorical@yahoo.com.