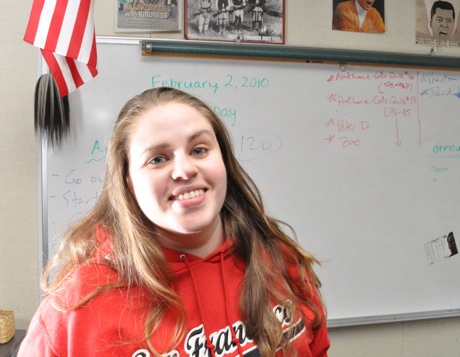 Kim Staff is a teacher because she wants to give back: “My middle and high school teachers helped me a lot – really a lot,” she says.

Kim, an Angelino, had never heard of Menlo Park, before coming north to do her graduate work at San Francisco State. Shortly after graduation she saw a job posting and applied for it. “I had just seen Michael Moore’s Bowling for Columbine,” she recalls, laughing, “and I got a call ‘Hi, this is Mike Moore’ – and the rest is history.” That Mike Moore was then principal at Hillview School.

Her dedication to teaching brings rave reviews. “Unlike some teachers, Kim really understands how teens think,” says Hillview parent Lisa Deal. “She gets students very engaged in what they are studying and teaches critical thinking amazingly well.”

Alongside her other duties, Kim runs an after-school program called “Rights of Passage” for at-risk kids, modeled after a program developed by her favorite high school teacher. “It’s about becoming a man, and about becoming a woman, in our society today. It’s a place for these kids to feel at home.”

“The kids I’m closest to aren’t the Menlo kids, per se. It’s the Tinsley kids, the East Menlo kids. Martin Luther King had a cool idea, but there are lots of problems, lots of conflicts – it’s not always easy to make it work.”