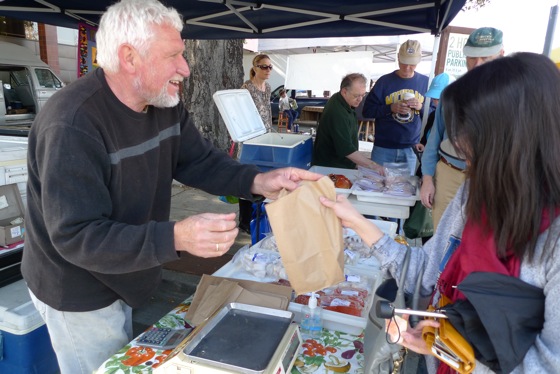 To Menlo Park Farmer’s Market regulars, Pietro Parravano is the man selling super fresh fish from the back of his pick up truck, hauled over the hill from Pillar Point, the home port of the fishing vessel Anne B. The catch varies from week to week but was particularly bountiful today – petrale sole, halibut, red snapper, sablefish, scallops, live and cooked crab, plus smoked salmon. “We’ll have fresh salmon in about a month,” says the skipper, who’s at the Menlo market 50 out of 52 weeks. (He’ll be absent Easter Sunday next week.)

Seeing photos being taken and questions being asked, a woman in the crowd piped up: “Pietro makes things happen on the Coast.” And indeed he does. Parravano has been at the forefront of the movement to help people understand that the interests of commercial fishing and northern California environmentalists overlap. As president of the Institute of Fisheries Resources, he advocates on behalf of sustainable fisheries and the future of commercial fisherman – and encourages consumers to seek out local seafood. Artist Carol Lois Haywood has a great profile of Parravano on her blog Trawlers and Tugs (and some lovely watercolors!) .

InMenlo food tip: Sablefish, which Parravano has had the last couple of weeks, while not well known (it’s also called black cod) is extremely rich in omega-3 fats. Grilled or sauteed, the fat acts as buffer against over cooking, making it a good choice for the novice chef.

I’ve been buying fish from Pietro since he first stated selling at the Farmers’ Market in MP. When was that, 10 years ago? I’ve noticed that he enjoys engaging in conversation with his customers, especially passing along ideas for preparing the fish. Many of his customers he knows by name, his customers all seem to know his. Thanks Pietro for being such a great member of our community.