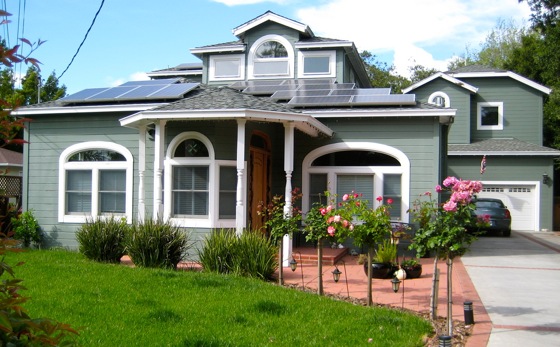 When the original structure for the Menlo Park Presbyterian Church on Santa Cruz Avenue opposite Curtis Street was torn down in 1950 to make way for the rebuilding of the City’s retail district, the church’s manse – built in 1892 on the corner of Chestnut Street about where Union Bank is now – was bought by church-member Francis Johnson. (Original manse – pictured below – was photographed in the 1940s by Elmo Hayden, owner of Menlo Camera Store.)

Johnson removed the top floor and then moved the house to a lot next to Fremont School. The school was at the present site of Rosener House on Middle Avenue between Fremont Street and Arbor Road. 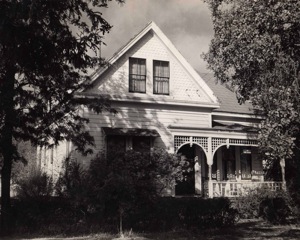 The exact location of the manse after the move has recently been re-established – it’s adjacent to Lyle Park. Sue Burrill and husband Calvan Brobeck have lived in the house at 640/644 Arbor Road since 1977. Sue’s grandmother, Ellen McLeod, bought the house in 1952, possibly directly from Francis Johnson (who himself never lived in the house). Sue remembers that her grandmother said the house was at one time part of a church.

In 1952 the house was still one-story, but had been turned into a duplex. In 1986 the Brobecks added a second story, and then in an extensive remodel in 2001, returned the house to a single family structure but with a new studio over the garage. If you look closely at the picture of the present house, you can see the same front windows as in the picture of the manse when it was downtown, although the entryway has been completely redesigned.

Thank you for the nice story about our home. Our house really did need a facelift and inside we did try to keep some of the original craftmanship intact. During the remodel we removed the old plaster from a wall in my grandmothers bedroom and found a set of double pocket doors with beautiful original brass hardware that for some reason they just plasterd over. They have now been restored and we enjoy telling the story to friends.

Bill Frimmel tells me that Francis Johnson married Esther in 1938 and lived at 341 University Dr (MP) until he died in 1990.