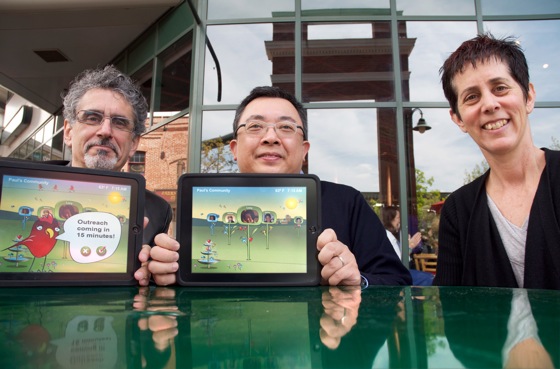 It’s about connecting with minimal, yet serendipitous, communication. Suddenly, isolation vanishes and spirits brighten.  Call it “emotional networking,” as envisioned by the startup team at Menlo Park-based Emota.

“We’re partly a money venture and partly a social venture,” says CEO/founder Paul To (pictured middle). The goal of the National Science Foundation-funded company is to complement existing tele- and social-health solutions to address not just clinical health but the psychological and social aspects of aging.

“One of the biggest factors in terms of adherence is family support, ” says To. “Interacting with our tool, people can be reminded about and check off what they’ve done that day.  If they have questions, they can touch on the nurse icon and send messages to the nurse. The supporting family gets the same information and a nudge saying ‘the patient missed this.’  We want to enable the family to act before it’s escalated to a more serious – and often more costly – situation.”

Founder To is joined by husband/wife team Richard Sachs and Karen Herzog (pictured left and right of To), who had started an online caring community – Sophia’s Garden Foundation – following their young daughter’s terminal diagnosis. “They had done what I was trying to do, ” says To, “using technology to create a community of healing. Their focus was on ill children, and I wanted to create a family/friends caring community around the elderly, but there were many similarities.”

Emota plans to offer a free and premium app. “We’re the unlike Facebook in the sense that Facebook tends to be wide and shallow,” says To. “Our tool helps people connect in a way that’s closer and more intimate. The adult children can use whatever they’re already using – such as an iPhone – and the aging parent can access the information via a picture frame device. It’s using technology  to bring together a circle of care.”