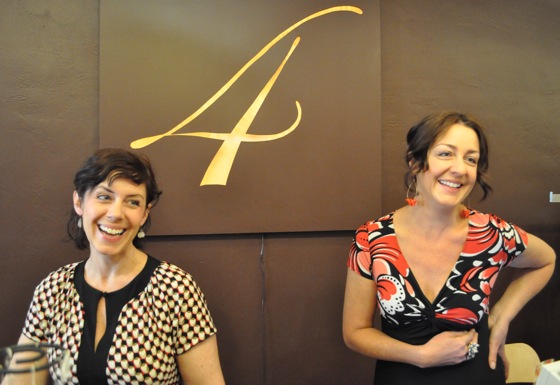 Sisters Julie (left) and Tamara Michel opened their clothing shop, Boutique 4 (formerly 4 Clothing Solutions), on Santa Cruz Ave. in downtown Menlo Park six years ago.  What followed was not necessarily a tranquil period for small retailers, to say the least. But they stuck to their business plan – offering reasonably priced clothing that’s unique – and succeeded where others failed.

“It’s good that their are two of us,” says Tamara. “We try not to panic and talk each other through the tough times.”

“We sort of compliment each other,” says Julie, who does the shop’s window dressing.

Good business plan aside, that they’ve endured – and managed to open a second store in Mountain View – is undoubtedly due to the sisters’ vivacious and welcoming personalities. Walk in their shop and you feel like you’ve been a customer for years  – even if it’s your first time. They now divide their time between locations, switching off who works where. “One of us tries to be in one store or the other,” says Tamara. “Our customers appreciate it.”

The sisters turned to retail after careers in high tech. “I’d done a little retail in high school,” says Julie. “And both of us wanted a change.”

Adds Tamara: “One set of grandparents were entrepreneurial, having started a bakery business. The other grandmother and our Mom taught us to sew.”

When InMenlo visited, the sisters were wearing dresses from the store. “They’re made in the U.S. custom for us,” says Tamara. Adds Julie: “Because we pick the design and the fabric, we can offer something unique not found in other clothing shops.”

Menlo Park picked the sisters as much as they picked Menlo. “We didn’t know much about Menlo Park and were actually looking for space in Palo Alto,” says Tamara. “The agent we were working with suggested we look here. The minute we saw this space, we knew it was perfect.”

Oh, I’m so glad you profiled them! I love their store and want them to get lots of business. I’ve found amazing things there, and all totally reasonable and much more interesting/unique than what one finds at the mall.