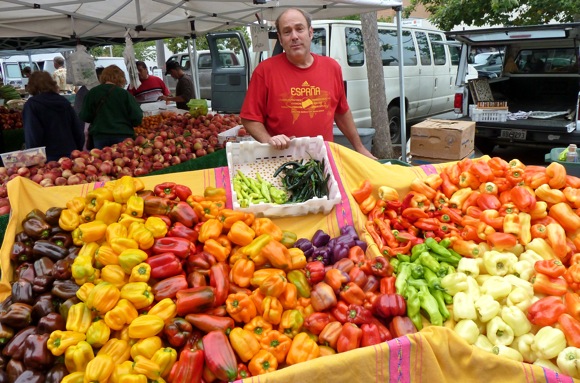 Admitting to be shorthanded today, David Winsberg of Happy Quail Farms was scrambling to get what he called the “first major mature color pepper display of the summer” set out at Menlo Park’s Farmers Market this morning. Admirers were already gathering, eager to snatch what many Bay Area chefs consider the best locally-produced sweet and hot peppers, all grown on a small East Palo Alto Farm. Pimientos de Padron are a farm specialty that make a great tapas dish: one of ten of these small, usually-mild peppers is hot. The classic recipe, offered by at least one local chef, calls for tossing them in olive oil and coarse salt, then searing them for about a minute in a hot pan, or until a slight char appears.

Couldn’t resist snagging a bag of those Pimientos de Padron peppers this morning. David was clearly flying the colors of the World Cup team he’s rooting for!