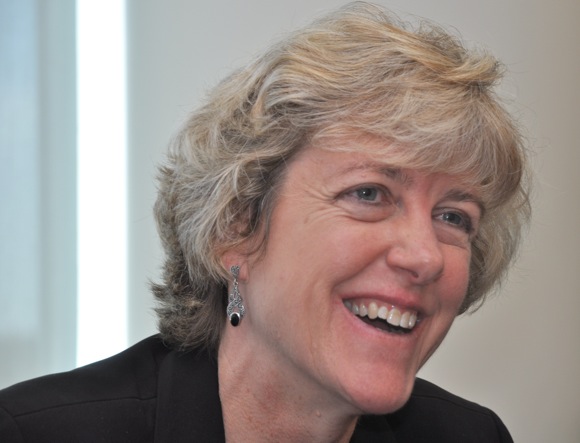 Lisa Freeman has a really big job . As Director of the VA Palo Alto Health Care System, she oversees three inpatient facilities located in Palo Alto, Menlo Park, and Livermore, plus seven outpatient clinics in San Jose, Capitola, Monterey, Stockton, Modesto, Sonora, and Fremont, where last year 60,000 vets received care. She manages over 3,000 employees in areas than span from clinical medicine to facility operations. And she does it all well: The Menlo Park resident recently received the Distinguished Executive Presidential Rank Award, given to less than one percent of government employees.

Lisa has been at the helm of the VA Palo Alto since 2001, one of the youngest and among a handful of women to hold a Director position at the time of her appointment. She credits some of her success to longevity. “I like to think my style is open and approachable.,” she told the InMenlo duo visiting her office.  “I’ve been in and around the PA VA for 15 years. People have known me in different roles.

“I’ve been able to build a great team. Nothing happens here due to a single person. We’re a team moving in the same direction.”

In 2005, the Palo Alto VA was designated a Polytrauma Rehabilitation Center, one of four in the country. Of the injured military personnel serving in Iraq and Afghanistan, 60 to 62% have some degree of traumatic brain injury. “Initially, there was considerable pressure to meet the expectations of the wounded  military and their families,” said Lisa, “and there was a lot of media scrutiny. We changed our approach to some extent, which included incorporating families into the treatment plan.”

As part of that effort, Fisher House was opened in 2006, which enables family members to be close to a loved during hospitalization and rehab. While the publicity surrounding the particular needs of this country’s most recent combat vets, the main clients of the PA VA continue to be Vietnam era vets, with Iraq/Afghanistan vets making up only about 10% of the patient population.

When pressed about what helped her accomplish all that she has during her tenure as Director, Lisa is quick to single out her husband. “He takes on so much of the day-to-day load,” she said. “I come home and he listens, patiently. He’s my number one support.”

Lisa also cites the people she works with as part of her support network. “The VA is a family,” she said, especially at the local level. I have genuine affection for and care about the people I work with. It’s a joy for me to make them happy.”

Why she likes being a Menlo Park resident

The Menlo Park resident is a unapologetic civic booster. “I love Menlo Park,” she said. “I was introduced to the town when I was an associate at the MP VA and had housing on campus. We had good friends in the Willows and chose that neighborhood when we bought our home.

“We know our neighbors. Love our neighbors. People are friendly and supportive. Our two dogs are well known in the neighborhood. The Farmer’s Market on Sunday is great. Menlo, well, it’s everything.”