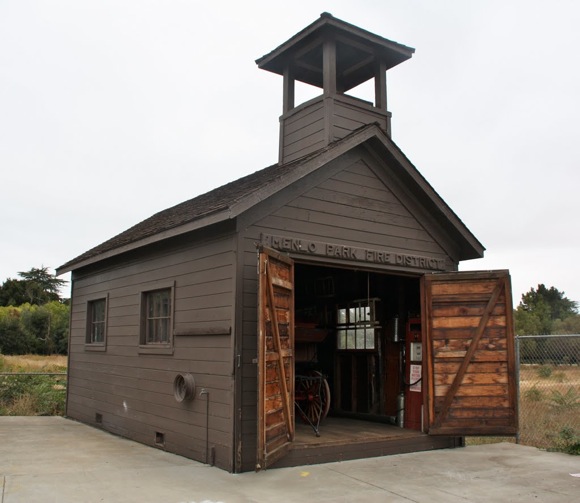 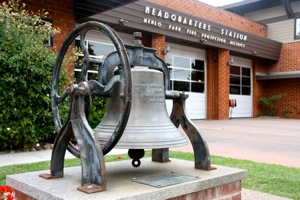 Stored in back of the Menlo Park Fire Protection District (MPFPD) Headquarters Station on Middlefield Road is Menlo Park’s first fire house. It’s a small, lonely looking structure that, but for its relatively depressing dull-brown color, looks something like a classic one-room school house.

The fire house was constructed in the late 19th century, well before the MPFPD was established (1916) or City of Menlo Park was incorporated (1927). The bell that originally hung in the tower on the roof is now displayed on the lawn in front of the Headquarters Station. It was cast by W.T. Garratt & Co. in San Francisco with the notation “Menlo Park Fire Dept/From Chris W. Smith/May 1900.”

The station was originally located on the west side of Merrill Street opposite the present day Model Train Club building. Volunteer fire fighters from the local community came to the station when the bell was rung. A nearby livery and two express companies competed to be the first to get horses to the station – only the first to arrive got the prescribed fee! 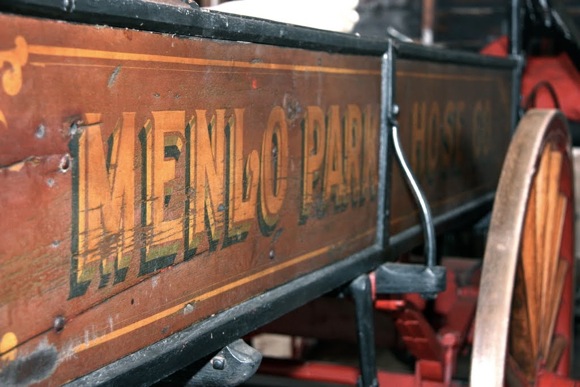 Open the old fire house doors and a beautifully preserved horse-drawn wagon is revealed with the lettering “Menlo Park Hose Co.” on the side and “No. 1” on the front.  It’s in such good condition one wonders how much it actually got used. Presumably there was also a pump wagon, but it hasn’t been preserved. 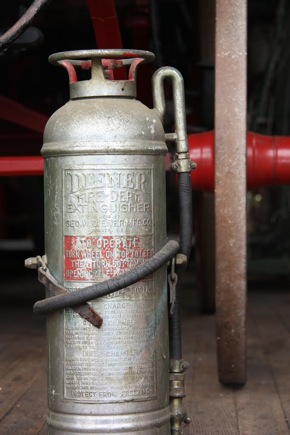 After the MPFPD was created, a brick fire house with space for two vehicles was constructed – with the assistance of Camp Fremont authorities – next to the original fire house. This was the beginning of the era of professional firemen and modern equipment. This brick fire house was in use until the Headquarters Fire House on Middlefield and the fire house on Oak Grove were constructed in the mid-1950s. At that time, the original small fire house was moved to the back of the Headquarters Station and the larger but inadequate brick firehouse was given over to commercial uses. It was eventually torn down to make way for Menlo Center, where Kepler’s and Café Borrone now reside.

Additional early firefighting equipment is stored in the old fire house, including a hose cart (a hand-pulled single-axle cart mostly used at large estates to play out the hose), ladders of various types including a couple pompiers, alarm mechanisms, fire extinguishers and vintage first aid boxes.

A new training facility is planned for the area now occupied by the first fire house. As a result the MPFPD is looking for a new storage location. The hope is a site can be found where the old fire house can be transformed into a firefighting museum accessible to the public.

Update courtesy of Fire Chief Harold Schapelhouman, who emailed InMenlo on 9/30: “The Fire District is actually planning to move the historic old fire station downtown again and place it behind our current Fire Station 6 on Oak Grove Avenue where it will be more accesible to the public. In recent years we purchased the home behind the station and we are getting ready to submit plans to the City with our proposal for the site which will include several phases based upon an incremental approach to the project based upon economic realities.”

Thanks for the link Jym.