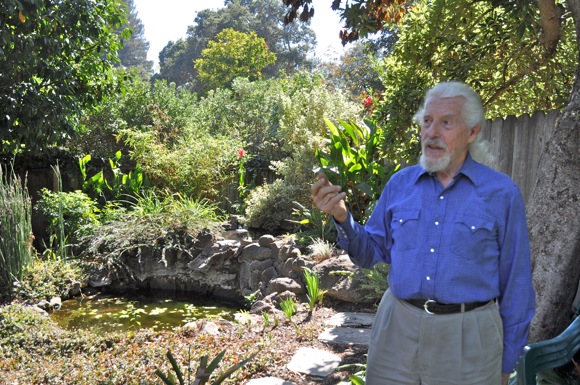 Downtown Menlo Park is almost in Ernst Meissner’s backyard. He and his wife Betty live just a few short blocks away. And for decades he’s tended and pruned it as if it really was his backyard.

“This is my home, my place,” he says. “I want to have company and enjoy taking them downtown.”

It’s not a stretch to say that just about every downtown beautification project has its roots in or is the direct result of an Ernst-generated idea. An architect by trade – now retired – he describes himself as “naturally civic minded.” Soon after moving to Menlo in the 70s, he got involved in the city’s Environmental Beautification Commission. “I generate a lot of ideas,” he says, “but it takes a lot of people to make them happen.” 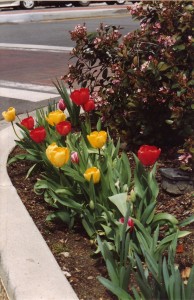 Some of the ideas that have become reality: downtown sidewalks and street furniture , a Redwood grove on Ravenswood near the train station, trees in the middle of  Santa Cruz Ave. Other efforts have been more transitory. Take, as example, his idea in 1993 to set downtown ablaze with spring tulips. Volunteers planted 11,000 bulbs which bloomed in 1994. “We worked on the mix of colors, labeling and counting every bulb,” he says. “My intention was to get everybody excited and do a regular planting. But instead of catching on, it fizzled.”

Ernst’s most recent project is the installation of LED lights in the downtown trees – an effort that augments other downtown lighting projects that preceded the tree wrapping. He says that it may be his last. “I’m 79 years old, and as you get up there in age, the zeros become more meaningful. I don’t mind working on a project but I think it’s time for younger people to take a leadership role.”

Just a germ of an idea in Ernst’s mine is a re-creation of the archway and hanging Menlo Park sign erected by two Irishmen from Menlough, Galway. The sign’s spelling (Menlo) was a mistake, but the name stuck.

“I think the corner of Ravenswood and El Camino would be the perfect place to erect a re-creation,” Ernst says. He’s just waiting for someone to pick up this conceptual ball and run with it, as he has so many times before.