The gift of roses: Thanks to St. Raymond Church and the Ferrari brothers 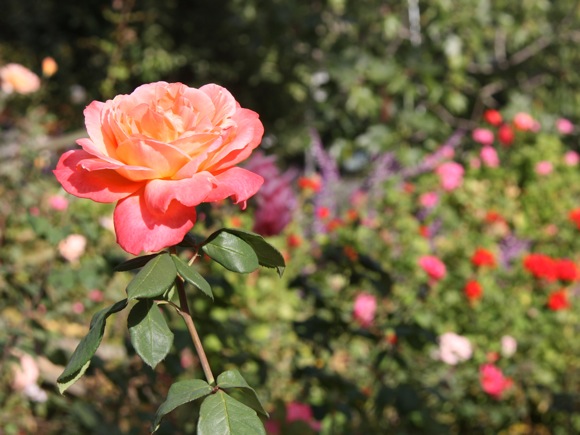 There’s a gift to Menlo Park residents hiding in plain sight on the corner of Santa Cruz Avenue and Arbor Road. Over 500 rose bushes bloom throughout the year in the St. Raymond Church garden. 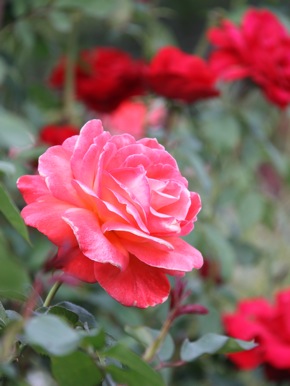 In some respects the garden has its roots in Italy, where the Ferrari family immigrated from in 1937. Stella and Carlo settled in Bernal Heights in San Francisco with sons Larry, Bruno, Roy and Ray. They migrated south to the Peninsula when Carlo bought a parcel of land just north of Moffet Field and started a truck farm.

Ray Ferrari married in 1953 and settled on Florence Lane not far from St. Raymond Church, which was still celebrating Mass in the playhouse of the former Felix McGinnis estate. He and two brothers opened up a barber shop on the corner of University and Santa Cruz where Marche restaurant is now.

“I was a Captain on the fund raising drive to raise money for the church building,” says Ray, seated in the parish garden. “I remember that one of Msgr. Kennedy’s prerequisites for being a Captain was that we had to give $10,000. That was big money – I did it on the installment plan.” The existing church was built in 1959.

The rose garden was added about 25 years ago, according to Ray, who says it replaced an unkempt portion of the parish campus, which just happened to face his brother Larry’s home on Arbor.

He is particularly fond of the Italian marble Madonna that stands at the back. “I went to Massa-Carrara, Italy with my Mom and Dad. That’s where Michelangelo did his work. We bought a block of white marble; the Madonna was carved in Italy and shipped to the states.” 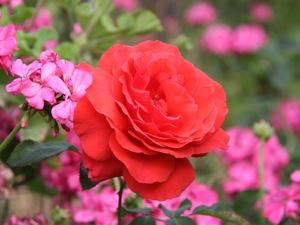 After his father died, Ray’s mother lived in a duplex on Arbor. “She used to direct the gardeners and do some pruning herself,” says Ray. “My brothers and I would buy the roses from local nurseries. She loved being in that garden.”

The ongoing funding of the garden remains in the hands of the three surviving Ferrari brothers – Bruno, Roy and Ray. The wide variety of roses planted results in blooms throughout the year, lovingly tended on Tuesdays by three gardeners.

The garden may be a de facto memorial for the Ferrari brothers’ mother, but it’s one that can be enjoyed by all.