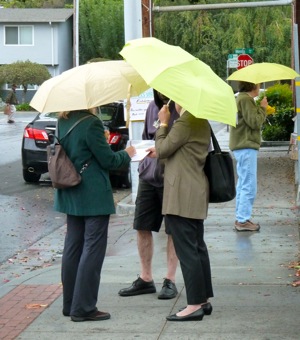 The steady rain that began overnight in Menlo Park kept away a good number of the regular vendor from this morning’s Farmers Market. But it didn’t deter two sets of petitioners spotted at the market’s east end. Nancy Couperus (rear, far right), founding member of the Menlo Park Downtown Alliance, was educating people about alternatives to the City of Menlo Park’s downtown development plan. Barbara Rosasco (center) was gathering signatures to present to the City Council asking that the BevMo use permit be overturned. Earlier this month, Rosasco and Maureen Hogan had presented their opposition to the chain liquor store to a sympathetic audience at a Hometown Peninsula meeting.

It sucks we can’t see any faces in this picture. Maybe you could take better pictures next time! It’s one thing to know it’s raining but another to have people without faces!