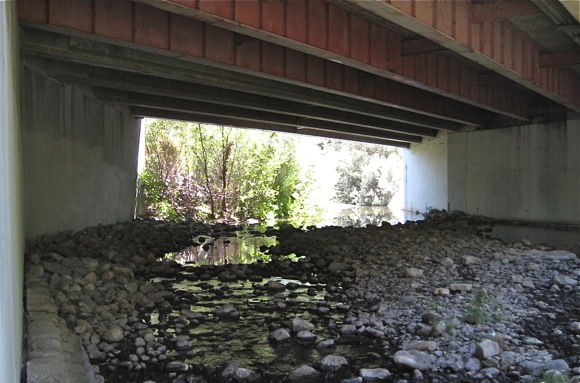 Today Sand Hill Road crosses San Francisquito Creek over a modern four-lane, steel-reinforced concrete bridge built in 2004 to replace a 2-lane version built in 1955. The photograph above was taken in late summer 2010 from the north bank of the creek looking upstream.

This crossing dates back to the 18th century when the Santa Clara Road, as it was first called, was used to drag Redwood lumber from the saw pits in the Woodside foothills to Mission Santa Clara to the south. In the mid-19th century, after the establishment of power sawmills, the area where today’s Sand Hill Road meets Portola Road was the town of Searsville, the point where lumber coming from various nearby mills was consolidated for the trip to the port of Redwood City and sometimes to the Ravenswood embarcadero (at the end of today’s Bay Road). 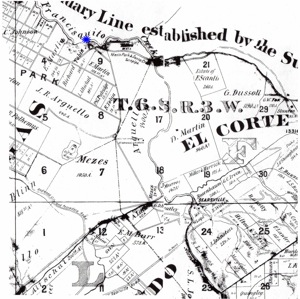 The old Santa Clara dray road became known as the Searsville-Mayfield Road, remnants of which are still in use on the Stanford campus. The road and location of the creek crossing (blue star) is shown  on a portion of an 1877 map of San Mateo County (the area beyond the county boundary, i.e., Santa Clara County, is blank). An interesting story: in 1929 the old wooden bridge collapsed leaving a tour bus dangling.

Copies of the complete map are available from the San Mateo County Historical Association or at the San Mateo County History Museum in Redwood City. Note that the name of Menlo Park’s “Santa Cruz Avenue” apparently derives from the street’s early function to connect the Menlo Park train station (from 1863) to the Menlo Park & Santa Cruz Turnpike (today’s Alpine Road) that opened as a toll road in 1873 and followed a much older Ohlone trail over the Santa Cruz Mountains to the coast.

This is the first of a series of posts with accompanying photos by InMenlo contributor Jym Clendenin about what’s “under Menlo.”

We’ve had technical troubles with photo placements. I’ll go in manually and put the photo in. Linda Hubbard, Editor