Under Menlo: The Ohlone-Menlo bike/pedestrian bridge 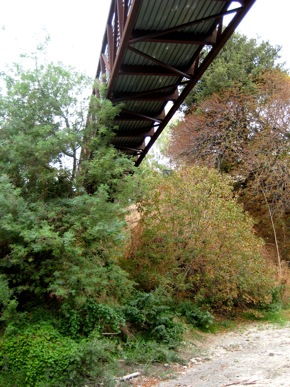 The bike/pedestrian bridge over the San Francisquito Creek at San Mateo Drive is sometimes known as the Ohlone-Menlo bridge since the Stanford side of the Creek was once an Ohlone settlement. The first bridge built here in 1977 was wooden. It was replaced in 1999 by the present steel structure (photo shows view looking toward Menlo Park). The Creek banks at this point  are 15-20 feet high – very steep and with limited access.

San Mateo Drive is the only street in west Menlo Park that dead ends at the Creek’s edge, yet there is no evidence that a vehicle bridge was intended for this street or that there was an earlier pedestrian bridge. At the time of Fort Fremont (WWI), San Mateo Drive represented the southeastern most extent of the existing housing in west Menlo Park, defining one end of the Clunie estate.

On the opposite side of the Creek, the house built by George Gordon in the 1860’s – Mayfield Grange – was purchased in 1876 by Leland Stanford and became the nucleus of Stanford’s Palo Alto Stock Farm. The house was located where the Classic Residences are now. A 1883 map of the Farm (below) indicates that the area between today’s bike bridge (blue star) and the Stanford house was a garden. 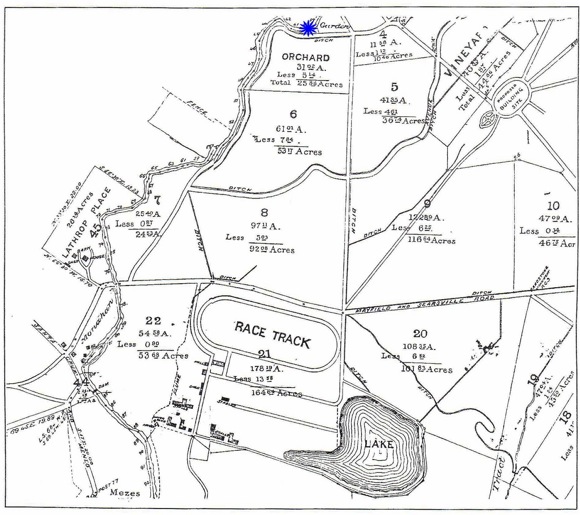 The carriage house, which is all that remains of the original estate, is about 50 feet from the creek east of the bridge and just on the other side of today’s Children’s Health Council  building. There is today a bike/pedestrian path that takes you from the bridge to the carriage house.  The map shows how Governors Avenue, which still exists on campus, ran from the Stanford house to Stanford’s stables, skirting the race track (no longer existing) and Lake Lagunita. At some point Eucalyptus trees were planted along the length of Governors Avenue between the Stanford house and the Lake.  Until the 1990s when Stanford West was built, these Eucalyptus trees still stood between the house and Sand Hill Rd.

This is the second in a series of posts with accompanying photos by InMenlo contributor Jym Clendenin about what’s “under Menlo.” Read the first.