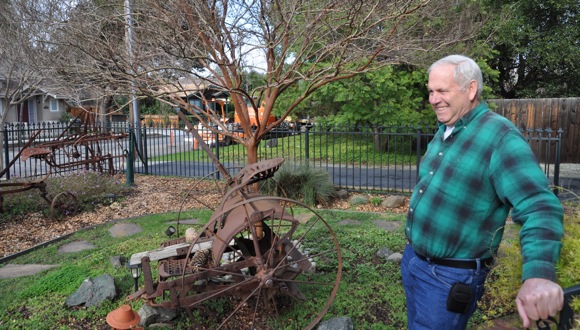 Harvard and Kansas don’t necessarily mesh, but they do on the Menlo Park street with the university name, filled with antique farm equipment culled from Midwest farmlands.

“I was buying a water pump from a guy at an antique show,” says Paul Caletti. “He asked me if I was interested in farm staff – he had a farm in Kansas. I went there,  looked over what he had, and bought a few things.

Paul thinks the road grader (pictured top) is probably the oldest piece of equipment. He’s been told that it was used in the late 1880s, pulled by four horses. 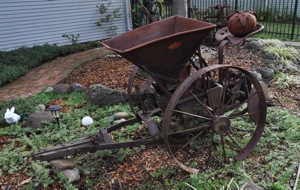 His latest acquisition is a potato planter (left). “I bought it in Montana. It’s another horse drawn piece of equipment and is in remarkably good shape.”

Paul was born and raised in Menlo Park and lives in his grandfather’s house, which was built in 1915. He’s been active with the Museum of American Heritage, which borrows various things he’s collected over the years.

The farm equipment is protected behind a wrought iron fence – as much a safety precaution as anything else. “We don’t want anyone climbing on it and getting hurt,” he says, adding that kids can try out the old hand water pump that also serves as his mailbox as much as they want.

That’s a stalk chopper, not a road grader.