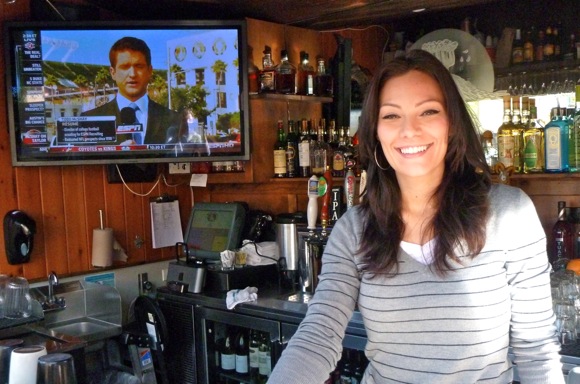 If you’re one of those football fans who thinks beer is ok, but a Division playoff or Super Bowl game would be better with a margarita or a martini, the Dutch Goose’s relatively new back bar is your answer.

The burger/beer Menlo Park mainstay serves cocktails on the patio and back room now. “We want to keep it somewhat separate, so that families can still come and enjoy the video games in the main room,” explained bartender Kristina Peters, who said she’s “always there.”

The bar, one of the many changes instituted by Greg Stern since taking over ownership of the Goose in 2005, may just be one of the best-kept secrets in Menlo. “I can’t tell you how many people wander in from side door and say, ‘I didn’t know you served drinks'” said Kristina. “We were packed for the World Series and Stanford football and that was great. But we’re still waiting to be discovered.”

Idk who took this pic, but whoever wrote it spelled my name wrong. Excellent story 🙂 !