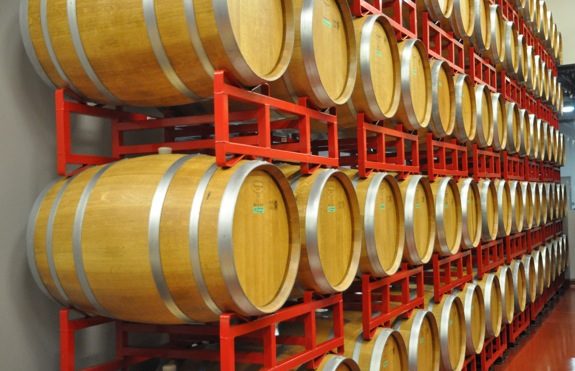 The vision was keeping Buff Giurlani up at night. He and Autovino partner Dick Burns had just purchased 70% of Woodside Vineyards from founder Bob Mullen (pictured below with Buff and Bob’s dog Corkie).  Buff and Dick were planning a move from the original winery in Woodside to a corner of the AutoVino space in Menlo Park. But, how should they stack the barrels and ensure they wouldn’t come rolling down on all the hyper-expensive stored cars during an earthquake? 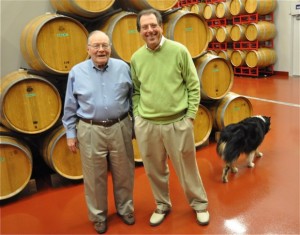 The solution, explained Buff on a recent tour of the winery, was stacking the barrels on rolling “wheels” similar to the kind that architects/builders use when constructing skyscrapers in earthquake-prone areas. “We may have lost some of the charm of the old winery but our new stacking system makes it a lot easier to get to a particular barrel,” he said.  And, safer too!

When Bob Mullen started Woodside Vineyards in 1960, it was the 120th winery to be registered in a state that now boasts thousands. The winery remains the oldest in San Mateo County. Grapes used in producing its red and white wines comes from 27 sites – all within Woodside or Portola Valley, with the exception of grapes used to make the award-winning La Questa Cabernet Sauvignon.  The La Questa fruit was planted further south in the Santa Cruz mountain range in 1884, making those vines the oldest Cabernet grapes still producing in the U.S. 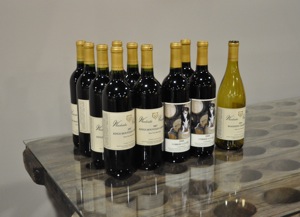 Brian Caseldon remains as winemaker/partner, with enthusiastic praise from Buff: “Can’t say enough about what Brian has accomplished. He’s hung around vineyards all of his life and has been with Woodside for 20 years.”

Buff said that the partners plan to expand production somewhat but are concentrating on local sales. “We may grow the business some but it will be to consumers, restaurants and stores in the Mid-Peninsula. We want to deliver wines ourselves and talk to our customers.”

Woodside Vineyards, located at 205 Constitution Drive, is open for group tastings by reservation; call (650) 851-3144. Their wines can be purchased at Robert’s Market, Bianchini’s and Draeger’s.

Photos of wine barrels and wine bottles by Scott Loftesness.

Bob Mullen is fabulous and his wine is outstanding. I can not wait to see the new winery space.

Brian makes great wine! He is very knowledgeable and a great guy. Fun new space with the “auto” tie-in – great to have Woodside Vineyards in Menlo Park.