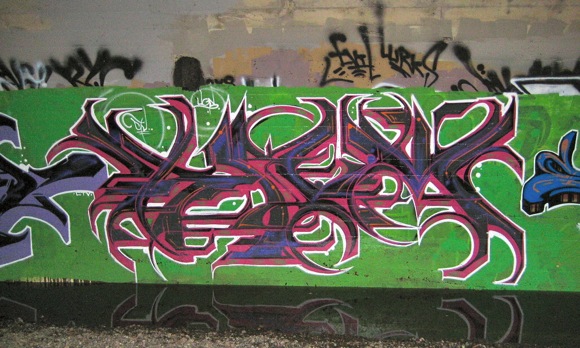 A plaque placed on the south side of the Middlefield Road bridge by the City of Palo Alto in 1969 implies that a ford at this location was the earliest regular crossing of the San Francisquito Creek by north-south travelers. The plaque reads: “Before 1852 ‘El Camino de en Media’ crossing of San Francisquito Creek was used by travelers between San Francisco and San Jose. Thereafter, a bridge at the present El Camino Real crossing was used. Even after the Middlefield bridge was constructed, the ford was used by teamsters to haul gravel from the creek bed.” 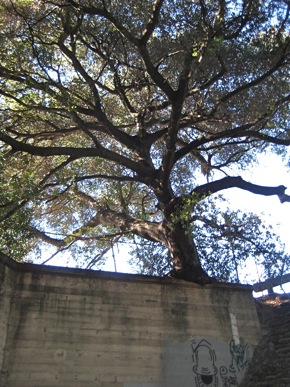 The small black and white photo above (courtesy of Palo Alto Historical Association), taken in the early 20th century, shows a wooden bridge at Middlefield. This may not have been the first wooden bridge at this crossing. The National Bridge Inventory database indicates that the present concrete bridge was built in 1936.

Although access to the Creek below the bridge is not nearly as good as at El Camino Real, the underside has a similar look,  especially the artwork, only one sample of which is shown here. The artwork saturates the first 10 feet of height of the arched walls of the bridge underside.

Looking at the outside embankment from within the bridge tunnel presents an interesting contrast between the necessary bridge structure and the natural foliage of the embankment. Perhaps even more striking is the giant live oak growing on the Menlo Park side of the Creek on the west side of the bridge. Given the angle of the Creek with respect to Middlefield, this tree is actually on Woodland Avenue.

This is the seventh in a series of posts with accompanying photos by InMenlo contributor Jym Clendenin about what’s “under Menlo.” Read the first, the second, the third, the fourth, the fifth, and the sixth.