Menlo Park Mayor Rich Cline is just one of a half dozen local officials who are delivering Peninsula Volunteers Meals on Wheels today as part of the the National March for Meals campaign.

“Even at the local level it is difficult to get real and meaningful time with folks in town and to see those who may be at a much different place in their lives,” said Cline. “This program allows people to contribute to helping some folks face to face and to do it with one of our great volunteer organizations. Mayor or not, this is a special day.” 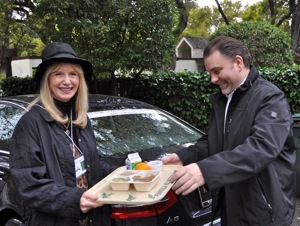 The Mayor and Peninsula Volunteers member Jayne Williams first stop today was at the home 97-year-old Joseph Martin of Menlo Park. He lives alone, with the assistance of a caregiver, and greeted his visitors with enthusiasm. It was chance to give a tour of his unique home that he and his late wife feel in love with at first sight. “We snapped it up before it even hit the market,” he recalled.

“We are excited about having the Mayors whose cities we serve participate in our event,” said PV Executive Director Bart Charlow.  “Senior hunger is a very serious problem in our communities – and one we can positively change. We hope to raise awareness and recruit as many people as possible to join us in the national movement to end senior hunger in our community.

“This is the fifth year our mayors have been involved with the national Mayors For Meals Day.  It is an excellent way to build our partnership to support our home bound population.”