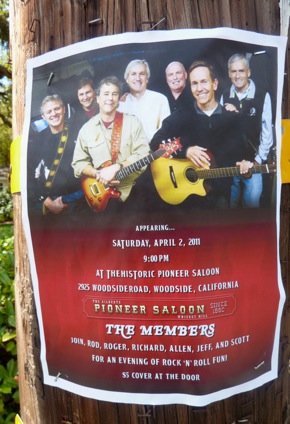 The philanthropically focused Menlo Park garage band, The Members, is hitting the big time with a paying gig at the Pioneer Saloon in Woodside on Saturday, April 2 at 9:00 pm. Whether they’ll actually get paid has not been confirmed, but you’ll need to pay $5.00 at the door to see them. The middle age band of local dads started playing together five years ago. Besides their passion for the music of their youth, the boost a play list featuring 90 songs that will take you back to “the day.” The “old guys” promotion is decidedly “old school” – posters stapled to electric poles in their neighborhoods. Rock on.

Old dudes who try to be 17 again is weird. All that grey hair and middle age spread doesn’t bode well with an electric guitar strapped to an old fogie. Perhaps plunking out some tunes on an old upright piano or one of those tacky mid century electronic tube organs would be more befitting:)