Under Menlo: The Pope Street Bridge 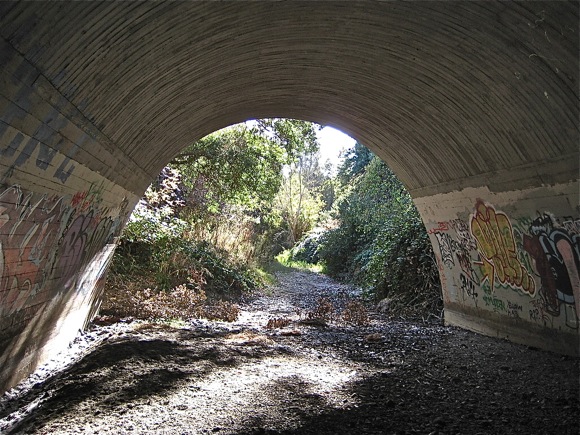 After Leland Stanford Jr. died in 1884, the Stanfords decided to build a university in his honor, the corner stone of which was laid in 1887. Later that year they decided to enable a new alcohol-free city intended for faculty and staff on the northeast side of the university, shunning the existing villages of Menlo Park (clustered around the train station) and Mayfield to the northwest and southeast respectively, with their numerous saloons and bars.

Palo Alto grew rapidly, reaching a population of 700 by 1894 when it incorporated. In 1907, with the population approaching 4000, a wooden bridge was built across the San Francisquito Creek at what is now Chaucer Street in Palo Alto. The area immediately north of the creek, which was still farmland, was within easy walking distance of University Avenue, which after 1906 had an electric streetcar line that ran its length. 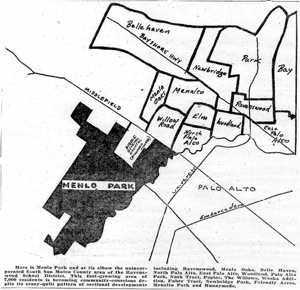 Developers offered home lots in this new area, although few houses were actually built until after WWI. Menlo Park, incorporated in 1927, did not extend beyond Middlefield Road. The unincorporated area closest to the Chaucer bridge (at Pope Street on the north side of the creek) became known as North Palo Alto, although the adjacent neighborhoods of Woodland, Elm, Menalto, Willow Road, and others eventually developed. The sketch of these neighborhoods shown left is from the October 16, 1947, issue of the Palo Alto Mail-Dispatch.

By the end of WWII there were several thousand residents living north of the creek. To handle the ever heavier traffic, the wooden Pope-Chaucer bridge was replaced in 1948 by the present concrete bridge and soon thereafter most of this area — excluding primarily what later became the city of East Palo Alto — was annexed by the city of Menlo Park. Today most of these neighborhoods west of the Bayshore freeway are collectively known as The Willows. 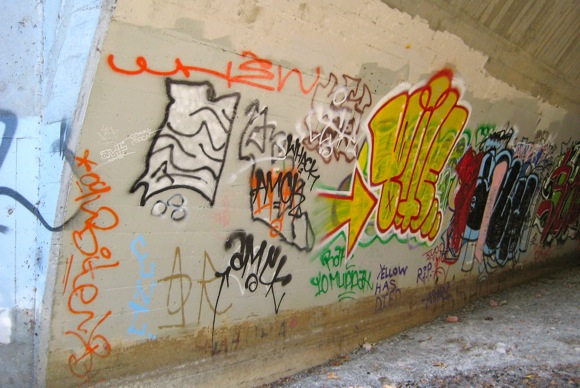 The bridge itself is a choke point along the creek. During periods of heavy rains, the water level easily reaches up to the top of the tunnel. In addition, with heavy water flow in the creek, debris tends to collect in front of the bridge, effectively creating a dam, which can result in flooding.

Access to the creek bed, especially on the Palo Alto side, is not difficult. As would be expected, there is a plethora of graffiti on the underside, though perhaps it’s not as artistic as at the Middlefield and El Camino bridges. The photos shown here were taken last October. The tunnel view is looking upstream. The graffiti-filled wall is on the Menlo Park side.

This is the eighth in a series of posts with accompanying photos by InMenlo contributor Jym Clendenin about what’s “under Menlo.” Read the first, the second, the third, the fourth, the fifth, the sixth, and the seventh.