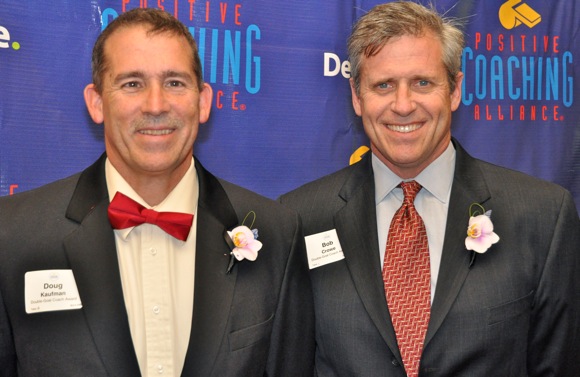 You know you’re in good company when another award winner of the evening is San Francisco Giants manager Bruce Bochy. Such was the experience of Menlo-Atherton Little League (M-ALL) coaches Bob Crowe (right) and Doug Kaufman on Thursday night (4/7) when they were honored by Positive Coaching Alliance. The pair was presented with the Double-Goal Coach Award, given to coaches whose first goal is winning, and whose second — more important goal — is teaching life lessons through sport.

Crowe and Kaufman launched M-ALL’s Challenger team for youth with physical, mental, and emotional challenges. “Doug and Bob are two of the most compassionate people you could possibly encounter,” wrote one of their nominators. “Their continued selfless acts have had a profound impact on our baseball community.”

Among the elements Crowe and Kaufman introduced to the Challenger team is a “buddy system” that couples youth volunteers with players who need assistance on the field. The volunteers get some valuable life lessons, and the players’ parents get to cheer for their children from the stands, rather than assisting them on the field.

Bob has been involved with M-ALL for 10 years as coach and has sat on the Board for 8 years, the last 3 as President. “I love baseball and love the kids, plus I had a great Little League experience when I was young and wanted to share it with my son and daughter,” he said about his involvement.

“The community around Little League is tremendous and not easily given up,” he continued. “And the community around the Challenger is even more special with the mix of players, families, and our local high school and middle school kids (buddies), all who create a very rewarding experience.”

Doug has also been involved for 10 years and on the Board for 8. “The dedication and attitude of the entire M-ALL Board is impressive,” he says. “Everyone puts in a ton of time and energy into making the League a positive experience for all the kids.

Founded as a non-profit within the Stanford University Athletic Department in 1998, Positive Coaching Alliance (PCA) has the mission of “transforming youth sports so sports can transform youth.”  To that end, PCA has conducted nearly 9,000 live group workshops nationwide for more than 475,000 youth and high school sports leaders, coaches, and parents.