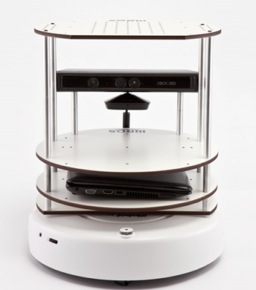 It was over a year ago that we visited Willow Garage, a robotics company, and made the acquaintance of PR2, a robot with a price tag of $500,000. At the time, the company was making available it free of charge to researchers at universities and other robotics labs. The PR2s “graduated” last May and by mid-summer they were delivering beer to their human co-workers.

Now the Menlo Park-based company is taking pre-orders for TurtleBots. “We are proud to introduce Turtlebot, a unique combination of state-of-the-art technology in a hobby platform,” the company announced in a blog post. “In keeping with Willow Garage’s mission to bring personal robotics to the home, we feel that the time is ripe to put a low-cost, personal robot kit with open-source software in the hands of hobbyists and developers.”

The lastest addition to the company’s stable of robots can “drive around the house and see in 3D” and be assembled with a single screwdriver, included in the kit. For those hankering to have a robot around the house, the complete kits costs $1,199.99.