Pam Caldwell Nootbaar tried to give up horses. It was the sensible thing to do given her parenting duties. The Menlo Park resident is the mother of three girls, ages 3, 5, and 7. But her heritage kept pulling her back. After all, she was practically raised at Kennolyn Camp and is now the camp’s General Manager.

“I was definitely introduced to horses at Kennolyn,” she said.  “I started taking riding lessons at home after several summers of riding at camp.  I finally talked my parents into buying me a horse when I was 12.”

Kennolyn was started in 1946 by Pam’s grandparents, Marion and Max Caldwell, and named for their children, Ken (Pam’s father) and Carolyn. To generations of campers they were known as Aunt Marian and Uncle Max. It was their vision that created the “Kennolyn experience.” And now, thanks to Pam, more people can get a taste of what that is.

“My grandparents were always struggling to make ends meet even though they had a very successful business,” said Pam. “I wanted to figure out what would make us sustainable.

“So I expanded the camp to include events and retreats, but I knew that those activities had to benefit the camp business — almost be subservient to it. For example, we don’t do overnight retreat business during the summer because it shares space in the resident’s area.” 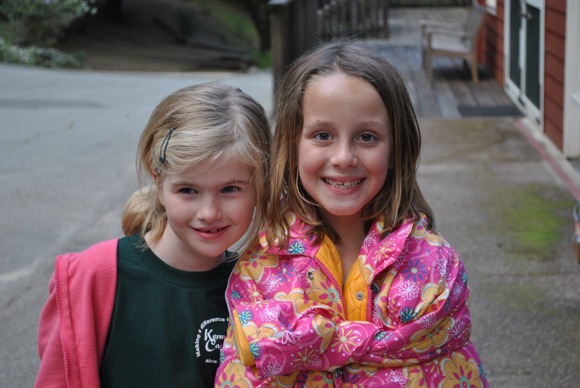 Pam has a Camp Director who lives on site and runs the operation organizationally. But her lifelong interest in horses keeps her involved on the equestrian side of the business. “Now I ride dressage,” she said, “but I used to do eventing. My horse (pictured) is named Pi and he’s big — 18 hands. He’s a Dutch warmblood. I’m working on my Bronze medal — I’m halfway there.

“I’d stopped riding when I got married. After my third daughter was born I thought, ‘I’m doing all of this but nothing is just for me.’  My husband encouraged me to start riding again.”

Riding is a key component at Kennolyn but far from the only activity. Pam makes the journey from Menlo to the 300-acre camp above Soquel two to four times a week, depending on the season. It’s been a part of her life, her whole life.

“The great thing about about going to camp is that everybody starts on the same playing field,” she said. “It’s a clean slate. What’s gratifying is when the parents come and pick up their kids on closing day. They see how their kids have developed — in every way, physically and emotionally — and how much confidence and independence they’ve developed. For many kids, it’s the best thing they’ve done in their lives.”