“Save Granny!” is rallying cry of neighbors who gather to protest removal of Valley Oak 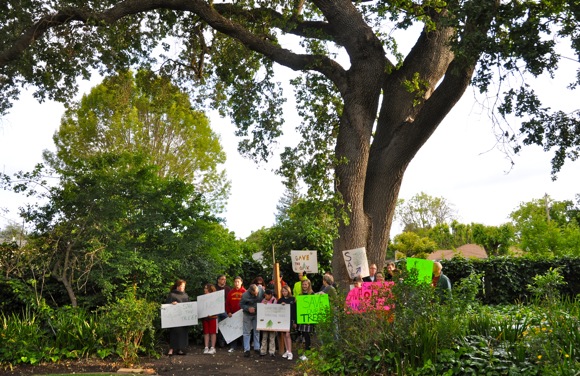 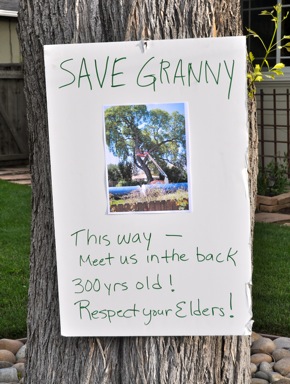 A group of neighbors gathered this morning in Charles Berkstresser’s backyard to protest the removal of a Valley Oak tree. The oak is located on a water department easement where a new Hetch Hetchy pipeline is under construction by the San Francisco Public Utilities Commission.

Mary Ann Mullen, who is acting as spokesperson for Berkstresser, issued a press release yesterday saying, “After three years of obfuscation regarding this majestic 300-year-old 100′ tall Valley Oak, the pride of the North Fair Oaks district, affectionately called Granny, the SFPUC notified a few neighbors late Friday, May 13 that they will be cutting this tree down Monday morning, May 16…We will gather at 827 15th Avenue in Menlo Park on Monday morning at 7:00 am to prevent this unilateral action.” The result was not only the gathering of neighbors, but media representing all the local TV stations. 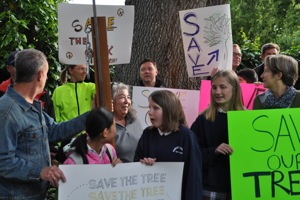 inspect and comment on the Valley Oak, which while on easement land, he’s enjoyed as  part of his backyard due to a fence located north east of the tree. The tree was found to have “good vigor and fair form with normal shoot growth for the species.” The report noted that the tree is on water department land and is not under the jurisdiction of San Mateo County tree protection ordinances. (The North Fair Oaks neighborhood is in unincorporated Menlo Park, so the City of Menlo Park heritage tree ordinances aren’t applicable.)

It also laid out three options that the SFPUC could take that would spare the tree: 1) Relocate the pipe where the over dig is more than 10 feet from the trunk; 2) Relocate the water pipe above ground to bridge over the root zone; 3) Tunnel below the trunk of the tree. 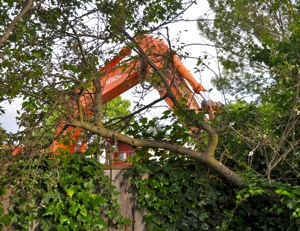 project an email asking that they suspend the plan to remove the tree today and instead meet with interested parties in the neighborhood to discuss options for saving the tree. “The citizens of this neighborhood want to see the reports from certified professionals on what mitigation options were considered and what the outcome of those deliberations were,” he wrote in the email.

As of early morning, the tree stood but the pipeline construction equipment loomed just a few feet away.

i was there at the prostest!!!!