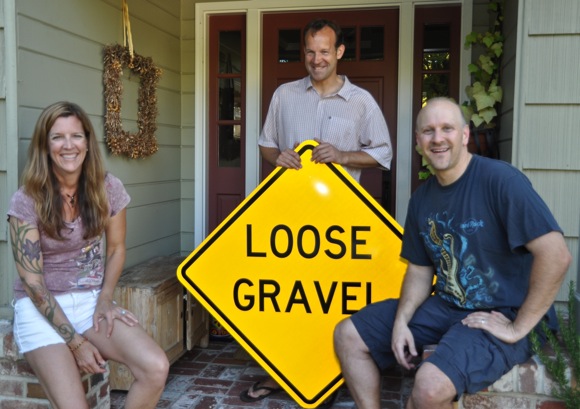 Wander to the El Camino end of the Menlo Park Block Party Wednesday (6/22) evening, and you’ll hear the sounds of local musicians Laurie Knox, Don Gentile, and Jeff Mueller. Together they’re Loose Gravel, a band formed in 2009 with the idea of exploring new directions in pop and rock cover songs.

“We have a repertoire of between four and five decades of music,” said Don (pictured right), who lives in Menlo Park and has a day job as a marketing director at HP. “What we’ve discovered is that you want to appeal to a wide range of ages at parties and functions.”

Don, who supplies vocals and plays guitar, started playing in a cover band in high school and jokes that he never matured past eleventh grade. While he was once in a Marin-based band, he’d been away from music for awhile before joining Loose Gravel. “I was born to rock and had been suppressing that urge for too long,” he said. “I needed to give myself permission to be a kid again. But the difference is I have a few nice toys now, and the discipline to learn the songs cold so I can be confident and have a blast playing.”

Menlo resident Laurie Knox is accomplished on piano, cello, and violin and has been playing in front of live audiences since she was five. She began singing in high school and continued in chorus while at Stanford, where she also picked up bass guitar. “I love classical music and grew up playing piano and cello, which is a great foundation for any genre of music,” she said. “I also have a soft spot for country music, but if I had to pick one kind of music it would have to be rock and roll!”

Formerly a criminal defense attorney, Laurie is now president of Argonaut Capital Corp. in Burlingame. “While it can be challenging to balance family life, work, and hobbies, music is part of who I am, and I would never consider leaving that out of my life,” she said. “Plus, it’s boring to be one-dimensional!”

Jeff Mueller, who lives in Portola Valley and works at a software startup, graduated from Fisher-Price percussion instruments to real drums at age nine. “My parents bought me a drum set so I’d stop banging on pots and pans in the kitchen,” he said.

Growing up in Seattle surrounded by the alternative music scene, he played in several bands, expanded to piano and keys, and toured with a vocal jazz group in western Washington. Asked about a the drummer who most influenced him, he replied: “Stewart Copeland of the Police. He combines technical skill with amazing creativity that he applies to music ranging from pop songs to symphonies and soundtracks.”

Loose Gravel recorded a six-song demo CD at The Annex in Menlo Park, which is available on Reverbnation. They’ll start playing at the Block Party at 6:00 pm.

Hey now, I was in the original “Loose Gravel” It was a band.

well what do you know about that?