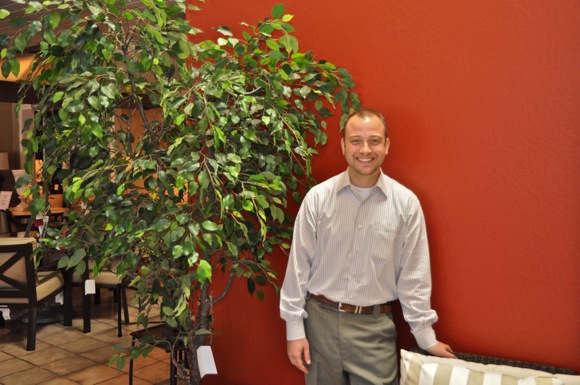 It was five years ago that City Councilwoman Kelly Fergusson and Brian Flegel, a third-generation member of the family that owns Flegel’s furniture store, came up with the concept of closing Santa Cruz Avenue to traffic and hosting a family-friendly, summer block party.

“In 2007, the theme was going green,” said Brian, who is chairing the event this year. “From the beginning, it’s been an entirely volunteer effort.”

New at the Block Party this year is the Bark Parade, which is scheduled for 6:30 pm where Crane Street intersects with Santa Cruz Avenue. “It’s open to anybody who brings a dog, whether they’ve registered or not,” said Brian. “We’re encouraging people to dress up their dogs, but they don’t have to. They’ll be some funny judging and awards.”

Another new element is what Brian describes as “some carefully selected food trucks,” including Butterscotch Bakery on the Go, Kara’s Cupcakes, Little Green Cyclo, and Mama’s Empanadas. “We’ve noticed the influx and popularity of food trucks,” said Brian. “This gives attendees a grab-and-go food alternative as well as some dessert items.”

The Block Party kicks off at 5:30 pm today (Wednesday, June 22) and runs to 9:00 pm. It also marks the start of the summer concert season at Fremont Park, with The Groove Kings taking the stage at 6:30 pm.

Some traditional favorites return to this year’s festivities. Santa Cruz Avenue restaurants will once again be offering outdoor seating and service, and there will be a kiddie area on the corner of Chestnut and Santa Cruz Avenue featuring an inflatable slide, bounce house, various pedaling/riding equipment, and a seed planting demonstration. Featured bands include Loose Gravel, Acoustic Sun, Blue, Andy Z, The Raytones, Jack Lorton, and The Buffalo Chips.

“The Block Party is a collaboration between the City of Menlo Park and the Chamber of Commerce that’s also a great showcase of local non-profits and businesses,” said Brian. “And this year the weather should be perfect!”