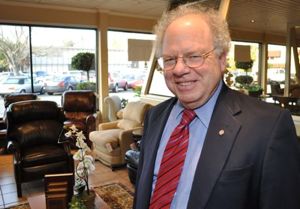 It’s nearly impossible to visualize downtown Menlo Park without including one of its most enduring fixtures, Flegel’s. That the furniture store has survived 56 years, including a major fire in 1983, is due in large part to the tenaciousness and vision of the Flegel family.

“My father was in the furniture business in San Mateo when he decided to go out on his own,” says Mark Flegel (pictured), who’s been running the business since 1984. “He looked at different Peninsula communities and settled on Menlo Park. There was  lot of construction going on and a lot of young families moving in, so it seemed like it had good potential.

“There were also 13 furniture stores within a five-mile radius! Advisers told him that he’d last only six months, that he was under-capitalized. History, of course, has shown otherwise. Flegel’s is the only one of the 13 left.”

To meet changing needs, Flegel’s has adapted over the years. As the surrounding community prospered,  the store elevated the caliber and quality of the furniture lines it offered. It also innovated.

“My father introduced interior designers into the furniture store business,” recalls Mark. “Before that designers and furniture were always separate. He sensed that offering both in the same place is what the community wanted. That turned out to be very true.”

Flegel’s the store and Flegel the family are both such Menlo mainstays there is little that’s not known about them. But here are a couple of nuggets, courtesy of Mark: “Most people don’t know we have clients all over the world. We furnished the Chancellor of Education’s palace in Stockholm, which is located next to the King’s palace.

“There’s also a version of our store in Yokohama thanks to the interest of a Japanese businessman who came in one day. We have no interest in it but I think of it as a kind of branch office!”