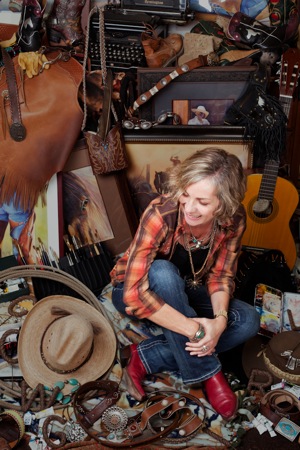 In a concession to a hot day, artist Christina Holmes was wearing sandals rather than cowboy boots but even they had a lariat leather kind of look. She’s told the story many times before — how an English girl from Warwickshire, England, now living in Menlo Park, became transformed by the West.

When photographer Scott Kline came to her house to photograph her for a series he was doing on “passions,” she just kept pulling out more and more of her cowboy-themed gear. “All of a sudden I was surrounded,” she recalls. “And for fun, somewhat hidden in the photo, are the letters that spell out cowgirl.”

Cowboys, horses, and rodeo events are themes central to Christina’s watercolors, which she’s been painting since 1998. She’d just given birth to the first of three sons and was experiencing postpartum depression. A friend suggested she take classes at the Pacific Art League, where she first took landscape painting from Robin Scholl and then watercolors from Steve Curl.

It was under Curl that her Western-themed art emerged, first inspired by a seven-day horseback trip through Red Rock Canyon and underscored by annual trips to a dude ranch in Wickenburg, Arizona. While there she takes tons of photos that she then draws on for her watercolors. One of her favorites is titled Buckaroo Blues (below right).

“From the cowboy’s stance, people assume he’s blue — or at least pensive,” she 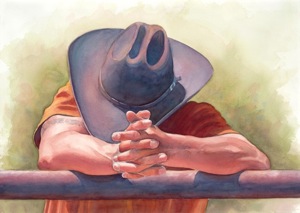 says. “But that wasn’t what was happening at all. A bunch of other cowboys had come up behind him and pulled his legs out from under him. So what he was really do is bracing himself so he didn’t fall!”

For the past three years, Christina has exhibited at Cowgirl Up!, a by- invitation-only show that’s held annually at the Desert Caballeros Western Museum in Wickenburg during the early spring. Her watercolors are currently on display at Allegro Framing and Art at the Ladera Shopping Center through the end of this month; one painting will remain in the shop’s window, changing periodically. Next January her watercolors will be on display at Konditorei, also in Ladera.

She’s starting to think about branching out to other mediums and subject matter. “The watercolor I sold during the show opening at Allegro features roosters,” she says. “And I’m thinking about trying my hand at oils.”

But it’s hard to take the cowgirl spirit out of Christina. She couldn’t contain her delight when three real life cowboys walked by the table outside of Konditorei where we were seated. Down from Eureka, they’d stopped for lunch on their way to pick up the cattle that have been grazing on Stanford land around the Big Dish for the past six months. Of course, a photo was in order! 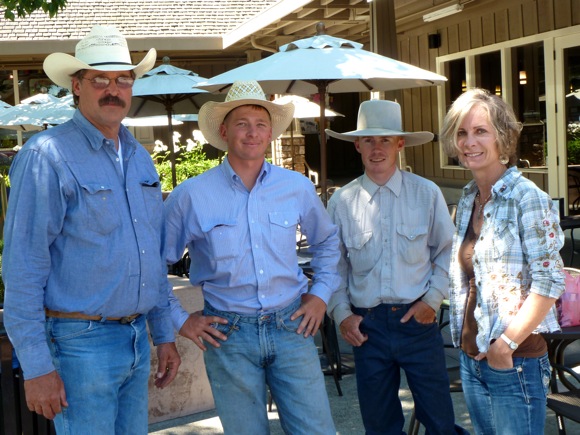 Christina’s work is stunningly beautiful. Her love for her subject matter is evident in every wash and stroke. Having seen her recent painting of roosters, I’m anxious to see the results of her branching out into new themes and media, but suspect there will always be a soft spot in her heart and her art for all things Western.

Thanks Stephanie 🙂 You are sweet.

Hi Christina,
I enjoyed the article and i hope it helps your profile ,bringing in more sales !
Best Wishes Peter

I completely agree. I saw a bit of Christina’s work recently at Allegro Framing in Ladera – it’s stunning!

As I was reading this article, guess who txted me? It was Christina Holmes. She is sitting in the SF airport ready to take off to Wyoming. She is visiting an artist that she met at the Cowgirl Up Show. So you see how she follows her passion! I can just imagine all the photos she will take as she explores the mountain region of the Western United States. There is something so alluring about Christina. I think part of it is her English accent. The other part of her is that she has this natural essence that allows her to connect with everyone and always get them to open up and smile. I know I smile around her and also get such a kick out of all the handsome cowboys she meets and paints. Yeeha!! Kellie J. Barrow

Thank you Kellie. For some reason I only just saw this comment by you! Thanks for your nice note.