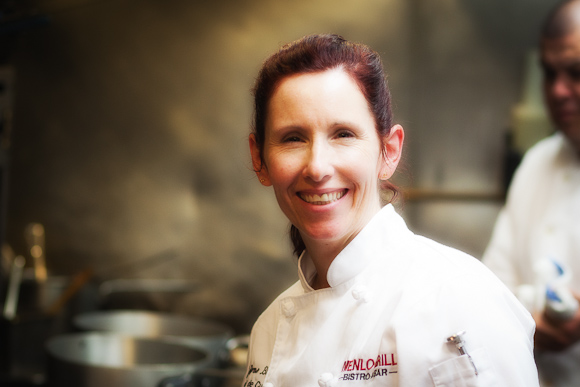 When she was nine years old, chef Juliene Brown won first prize for her eggplant lasagna at the San Mateo County Fair. A graduate of the California Culinary Academy, she started cooking professionally at 18, has worked at a number of local restaurants and hotels, and most recently owned a catering business. Now, as chef at the recently-opened Menlo Grill, Juliene has her “dream job.”

“This is my baby, I love this place,” she says of the restaurant that’s located at the Stanford Park Hotel in the space once occupied by the Duck Club. “I literary float out of bed in the morning.”

Julienne has put her stamp on all three of the restaurant’s menus — breakfast, lunch and dinner. The emphasis is on American comfort food with everything made in-house from scratch, or as Menlo Grill manager Kelli Praught sums it up, “our unique take on classic American dishes with an emphasis on great flavors.” (Menus are available online.)

While operating her catering business, it was always at the back of Juliene’s mind that she really wanted to run a restaurant kitchen. In a bit of irony, she finds herself doing so in the same hotel in Menlo Park where she had her wedding reception eight years go. The mother of two young children, she’s able to take on the responsibility thanks to an incredibly supportive husband.

Menlo Grill is open for breakfast, lunch and dinner seven days a week. In addition, late night fare, drinks, and house-made desserts are available daily until midnight. See the reviews for Menlo Grill on OpenTable and Yelp.

GET JULIENE BACK!!!!!! FOOD HAS NOT BEEN AS GOOD SINCE SHE LEFT –