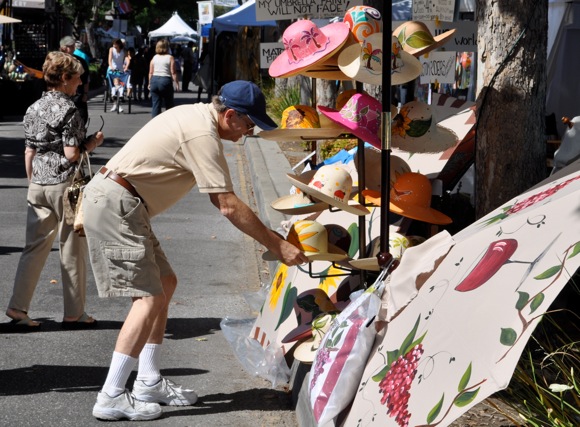 The weekend — July 16-17 — marks the 25th anniversary of the Connoisseurs’ Marketplace in Menlo Park. Presented by the Menlo Park Chamber of Commerce, the festival features 250 artists, music, chefs’ demos, food and drink, a kid fun zone, artisan specialty food purveyors, a collector car show, home and garden exhibits, health and wellness displays, and an organic and green products showcase. New this year is the Cuda Lounge, where attendees can take a break and watch sporting events on flat screen TVs while relaxing on comfy couches.

Connoisseurs’ Marketplace was launched in 1987 as the first major fundraiser for the Menlo Park Chamber of Commerce.  In designing the event, the founders went for an all-out elegant look and brought in a juried art show, gourmet foods, super-premium wines and a chefs’ demonstration tent that set the festival apart from the formats seen at most other street fairs. 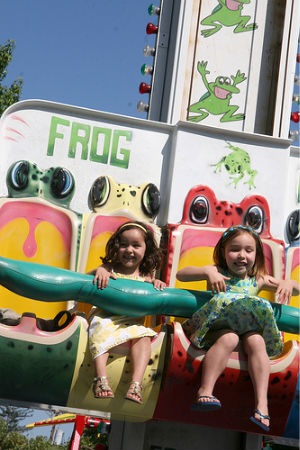 “For 25 years now, Connoisseurs’ Marketplace has been Menlo Park’s largest annual event,” said festival co-chairman Rick Ciardella. “Every year, the festival brings thousands of visitors into town and generates tremendous exposure for our merchants and city. With our charming, tree-lined downtown, the festival serves as a superb showcase for Menlo Park.”

Among the hundreds of artists, vendors and other official participants, a few happen to also to live in Menlo Park. These include jewelry designer Soni Bergman (space 608), tie-dye clothing maker Karen Ferguson (space 919/921) and photographer Fred Mertz (space 938). In addition Kathleen Jensen, owner of Butterscotch on the Go, will be in the Chef’s Demo tent on Sunday at 3:00 pm revealing her secrets for making silky French custard topped with salted butter crunch.

For Soni Bergman, this is the 13th year she’s sold her jewelry at Connoisseurs’ Marketplace. “It’s a local show for me,” she says. “It’s a blast to see my customers coming back for years, some of whom have become good friends of mine. Interacting with people at this event is always a thrill. And seeing people wearing my jewelry has always been very gratifying!”

Hours of the the Connoisseurs’ Marketplace, on Santa Cruz Ave. between Johnson St. and El Camino, are 10:00 am to 6:00 pm. A free “Saturday After-Hours Concert” featuring David Martin’s House Party runs from 5:30 pm to 8:00 pm July 16 in Fremont Park.  More information and schedule of events is available online.